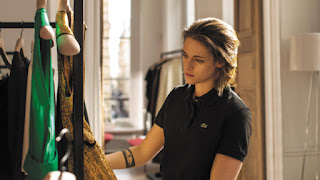 Can People Stop Saying Kristen Stewart is Awful Now? This is Another Home Run for K-Stew.

Opening:
Post Twilight, Kristen Stewart has pick some notable and award-winning roles that make her an actress to look out for. Straight up, this is a bizarre film, but in the best way possible. I will do my best to review this so let’s get reel and break this down.

Plot:
A ghost story set in the fashion underworld of Paris.

Pros:
I haven’t seen the director’s previous work, also with Stewart, Clouds of Sils Maria; but after seeing this one I am curious about his past and future work. Personal Shopper is a mix of horror, drama, and suspense and never feels jumbled, but more of a cathartic look into grief, loss, and finding purpose using different genres. The absolute brilliance is taking the audience for a ride being frightened one minute to being emotional and filled with (pun intended) soul. A lot of subtleties plague throughout whether it being the performances or the masterful construction of a scene and how it affects you. Bottom line, this story is unpredictable and that’s a good thing to have this mysterious cloud around it.

Cons:
One plot line, while effective in suspense and the unknown of the purpose, didn’t really matter in the end when all is revealed. It’s a minor gripe and doesn’t tamper with my score.

Pros:
Kristen Stewart is wonderful. The subtleties of her performance accentuate her character and add plenty of depth. The core of her character has emotional intensity and learning to cope with it between the spiritual and real world is something we all could face with if we lose someone close to us and want to find some way to communicate with them and guide us to heal.


Cons:
Honestly, everyone else was just fine. Stewart is electric without being boisterous and everyone else is there to just service the story.

Pros:
From the establishing shots of France to the unnerving, harsh lighting, there is always something to feast your eyes with visually. It’s not the best cinematography I have seen but some of the shots are definitely memorable to establish the mood and/or tone.

Pros:
At just under two hours, it’s well paced and the unpredictable story will definitely keep you interested.

Cons:
Some of the special effects were a bit hokey, but this isn’t the point of the movie so I will let it slide.

Overall:
I don’t need to say anymore. Experience it for yourself as this will divide audiences…you are warned. I need to re-watch it again to fully appreciate it but as of right now I liked it.