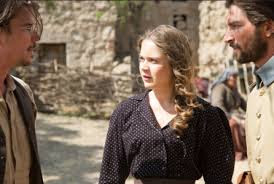 If you are in the mood for a costumed romantic tale filled with pretty people, some sort of racial/religious/political theme in a beautiful foreign countryside and you are not expecting much, then this is a good way to kill some time. Like The Promise that is another romantic movie of the same time period of World War I which also involves a love triangle. The Promise is between an Armenian woman, an American journalist and an Armenian medical student. The Ottoman Lieutenant mixes it up with an American woman, an American doctor and a Turkish officer. Directed by Joseph Ruben (Sleeping with the Enemy) and written by Jeff Stockwell, the story briefly deals with the conflict of the Turkish Muslims, the Christian Armenians, and the invading Russians. It mostly concentrates on the fluttering romance of the young nurse, and the handsome officer amidst the open fields, and a scenic island.

Hera Hilmar plays Lillie Rowe, a plucky young nurse who is fed up with the attitudes of her fellow professionals who refused treatment to an injured man because of his color. She meets Jude (Josh Hartnett) an American doctor who is working at a remote missionary hospital in the Ottoman Empire. Before you know it, she tells her upper class Philiadelpian parents that she is using her inheritance to finance her trip overseas. Filling her late brother's truck with medical supplies she sails to Istanbul. Somehow she manages to get a military escort in the form of Michiel Huisman as Ismail, a lieutenant in the Ottoman Imperial Army. His mission is actually to access the rebel Armenians in the area. She meets the hospital's founder Dr. Garrett Woodruff (Ben Kingsley) who tells her to go home, until he see's that she is actually proficient in her skills. Lillie adapts to her new environment with ease and is not afraid that impending war is in the near future.

Icelandic actress Hera has a bit of a flat American accent with an equally flat voice. The camera loves her face and she shines against the backdrops of the locations. There isn't really any backstory on why Lillie is such an independent feminist and her responses seem more contemporary than turn of the century. Meanwhile Jude is stuck in the structure of the American man who must protect the woman. His response to being rejected is full of machismo and pouting. We see Lillie becomes friends with a young village girl in the hospital, but no explanation on how everyone communicates without speaking the local language. Plus everyone's lives are better now that feisty Lillie is there, except for Jude, of course. The handsome Ismail is the stuff of romance novels. The long hair, the scruffy face, the uniform and winning smile, and you just know there is no contest for Lillie's affections. So what, that they have religious differences. The romance between Lillie and Ismail is a force that neither can deny, although Jude is the loser who can't come to grips with losing Lillie to a Muslim. You just know that nothing good will come of this.

It is interesting to note that this movie was financed from Turkish sources and was produced by Turkish producers. The purpose was to promote the Turkish version of history in which the Armenian Genocide never happened. The other Ottoman movie, The Promise will tell the opposing view. But unless one is familiar with any of these historic details, the movie will just be a pretty and somewhat forgettable tale you will find on Netflix.

Email ThisBlogThis!Share to TwitterShare to FacebookShare to Pinterest
Labels: The Ottoman Lieutenant review