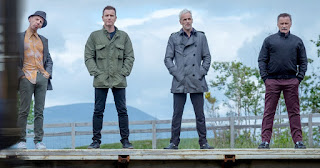 The Equivalent to a Elmer’s Glue High

Opening:
The original Trainspotting defined the year 1996, and hell, even the 90’s with the drug scene shot, directed, and edited in a unique way that really stood out as a profound journey about people getting high and trying to quit the addiction. I love the original. With this sequel coming out, I was excited to see where the story would go. Honestly, I could have gone without seeing it and feel like you don’t need to see it. Let’s get reel and break this down.

Plot:
After 20 years abroad, Mark Renton returns to Scotland and reunites with his old friends Sick Boy, Spud, and Begbie.

Pros:
Danny Boyle, director of the first as well, does slip us back into this world with the characters we love to follow twenty years later. The interesting cinematography and editing choices are why Boyle stands out in his films and this is no different. There are a few scenes that Boyle really gets great performances out of the actors with some interesting dialogue that makes you look at your own life. Lastly, Ewen Bremner, out of the main four, does have the more compelling storyline.

Cons:
The story itself feels dragged out and extremely unfocused. Multiple storylines and odd tonal shifts doesn’t bode well either for its near two hour runtime. I hate using this word but this film twenty years later felt a little…pointless and didn’t have much to say.

Pros:
As much as I didn’t care for the story, the performances are all good. Ranging from darkly comedic, to frightening, to vulnerable, everyone does give it their all in what appears to be the last film in this universe.

Pros:
As I stated above, Boyle always keeps his films visually appealing and provide a blend of interesting camera angles, movement, and how the characters are framed. There are even a few shots that I still think about because of the artistry of that particular shot. Needless to say, it’s never boring on that level.

Pros:
Just like with the cinematography, the editing style is swift when it needs to be and slows down when the scene swells with emotion weight. On top of that, Boyle edits scenes with fascinating little visuals cues that just make that scene pop a bit more.

Cons:
Since the story isn’t compelling and all over the place, the movie drags considerably and overstays its welcome.

Overall:
It’s nowhere near the original but it’s also not the worst thing I have seen. The bad can’t take down the good and ultimately levels out for me. The length of the film is what takes the grade down a bit for me.