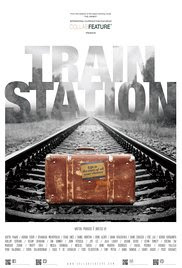 Director(s):
Over 40 different directors
Cast:
Over 40 different actors
This was a real head scratcher, but I love experimental pieces. It's starts out simply as the person in brown's train is late. The same role done by over 40 directors, using over 40 actors, and filmed in over 20 countries all over the world is a wild endeavor indeed. It was surreal but easily relatable like those Choose Your Own Adventure books (showing my age) if you go down the wrong path you can always go back. The range of the actors change by gender, age, race, religion, location and sexual orientation which gives the idea that it could be anyone. This brilliant "what if" anthology will keep you guessing no story stays the same but it's all the same story (weird huh?).

After the missed train the story begins for our protagonist with paths that go from extreme to banal. It's seems to centered around the relationships our character is in that is caught cheating and just a mere choice change moves the story in a completely different direction which is very exciting to say the least. From German clowns to deal made with the devil this flim could go anywhere. With each scene evolves you can see how every filmmaker has differences in buget and style, I learned that one scene was filmed entirely by the light of a cell phone. It's like the MacGyver of movies doesn't matter what situation you put them in they will find a way to work with it.

The ingenuity of the cinematography is incredible, I love guerrilla film making. Just going out and filming it is this movie's mantra. The tone is all over place at times deep and heartwarming then other times it's unnerving and gets kinda weird (yeah they go there) but if abstract is your thing you will love this film like I did. The acting is varied like it's cast but something like this should be seen as a whole and not dissected. There was very little soundtrack only for some scenes but all the better because that might distract from the content of the film.

Overall I really loved this one, I have a penchant for impressionistic film (and horror) so this was right up my ally. For all of these people to take these risks of filmmaking is admirable. I know I wouldn't be so vulnerable to show who I really am by putting my own spin on things even though it's the same story, you make it your own. If u get a chance to see it please do it is definitely worth the ticket.
(Review by Samantha Leggio)