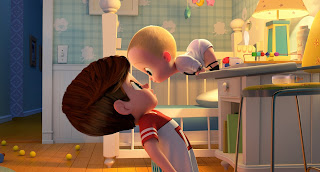 In the world of The Boss Baby, babies are not the result of the procreative measures that have become the subject of that old analogy involving birds and bees. In fact, when the real process is whispered to the title infant-but-not-really, he exclaims in disgust. It's one of the few clever moments in a screenplay (by Michael McCullers and based on the book by Marla Frazee) that otherwise goes for the lowest common denominator in its humor. The premise here is that babies are inherently heavenly beings who, based on the curious criterion of ticklishness, are either sent to a family or are shunted aside into management. Once they enter the field of the desk job, they are force-fed a formula that retains their infantile features. Their intelligence, however, grows as it usually would.

In other words, this is a surprisingly unnerving movie, filled with as many creepy details in the specifics of the universe it has built as it is riddled with lazy holes in the plot. Lactose intolerance, we learn, has a detrimental effect on the formula's power of age retention, until the screenplay decides randomly to drop that bit of information to wrap up the plot. Babies are in a constant state of war with puppies for reasons that are never quite developed beyond the fact that both are quite adorable. The villain's scheme, in fact, uses this never-ending battle of cute as leverage to breed a certain form of puppy, and that only adds to the creepy factor. The villain himself is also an odd creation, and his comeuppance, which of course involves the formula, seems to belong to a much more adult motion picture, perhaps one in the horror genre. As for the Boss Babies, the way in which McCullers and director Tom McGrath repeatedly put what appear to be toddlers in danger borders on the irresponsible.

One such Boss Baby, as they are called at BabyCorp, is voiced by Alec Baldwin, perhaps the only actor who could believably sell the idea of a man stuck in a baby's body and suffering from the subsequent snarky cynicism (It's an easy joke to make, but the actor's recent stint on a certain sketch-comedy program is definitive proof of this). He is transferred to the Templetons (voices of Jimmy Kimmel and Lisa Kudrow), whose elder son Tim (voice of Miles Bakshi as a child and Tobey Maguire as Tim's older self in narration) quite decidedly does not take to the infant's intrusion upon his comfortable existence. Tim immediately cottons on to the Boss Baby's identity, and a reluctant bond is developed before Tim's parents, who work at a company called PuppyCo, are kidnapped by Francis E. Francis (voice of Steve Buscemi), a former Boss Baby who was fired in disgrace from BabyCorp and wants to revenge himself upon them.

Any plot is secondary here to a lot of goofy antics that stretch the animation department's talents and precisely no one's imagination. It's no secret at whom the film is aimed, for young children are likely to respond to the brightly lit nature of the thing and to the silliness of the tone. Children, as ever, deserve much better than this thin excuse for an action-comedy, though, especially one whose "action" is primarily bursts of controlled chaos, such as an apocalyptic battle in a backyard, and whose comedy consists of jokes that sometimes cross an invisible line from crude to genuinely questionable. Some laughs, such as when the Boss Baby must disguise himself as a puppy, are successful. The whole of The Boss Baby, though, is so slight and off-putting that it ends up defining mediocrity.
*½ (out of ****)
(Review by Joel Copling)