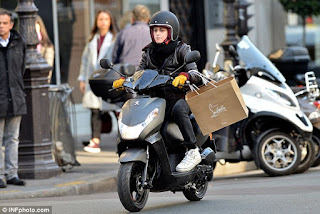 French director, Oliver Assayas is once again directing Kristen Stewart in his new offering, "Personal Shopper". Set in Paris, the storyline explores a couple of worlds that don't really mesh well together onscreen. High society fashion maid, creepy mansion solo seance, secret admirer mystery texted, murder mystery and lots and lots of tense emoting from Miss Stewart, as usual and expected. Kristen, famous for not smiling, doesn't disappoint here and keeps up the angsty, terse, twitchy act. Overall, it plays disjointedly and patchworked, as a mostly European cast populates the film. We are reminded how utterly tedious rich society types can be, with all their air kisses and seemingly purposeless lives lived in the bright lights. And it annoys.

Stewart plays Maureen, a personal fashion shopper, for demanding, pouty, hand-talking, wealthy social gal, Kyra. They communicate mostly via notes, texts and messages as Mo motorbikes around Paris fashion houses, pulling dresses, belts and shoes for her client in a rather self professed unfulfilling job. She spends after work hours trying to reconnect with her deceased twin brother, one medium to another, in the old mansion where he died. She connects with something, to be sure, but it is probably not her brother, who she is expecting to keep their sibling pact of whoever goes first must send a sign or contact the survivor.

The movie tries to be scary and mysterious, but it just blends old kitschy ghost story moments and tries to stitch them together in a mismatched quilt of a production. Vapors moving about. Water glasses dropping. Doors open in succession as if someone is walking out of rooms and out of buildings. Mysterious texts from a stranger who appears to be stalking Maureen. But that's sort of a new thing. Technology use by ghosts? Novel idea. Maureen's verbal delivery is clipped and abrupt. She's the type of gal that you really can't handle being around for too long, without being drawn into a weighty mess.

A quick day trip to London to do the same fashion pull is all in a day's routine and seemingly no big deal. Just another big yawn, as mystery guy starts texting cryptic and short messages. There is really only one character it can be so there is no real shocker there.

All in all everything just feels quite disjointed, like visiting a rich proper aunt who tells you to go here, do this, go there, don't do that, don't touch, and then not being able to sit on any of the furniture, or eat at the table set with the China and silver. One just can't get comfortable with it all. They say that when a film gets a mix of applause and boos simultaneously at a film festival, that makes it a must see, especially when that happens at Cannes. In this case, beauty will be in the eye of the beholder. Behold Personal Shopper if it sounds like it might be up you alley.