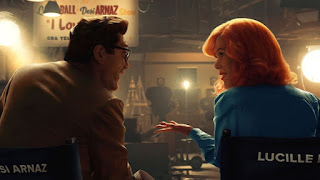 New cinematic episode of I Love Lucy is here, and it’s called Being the Ricardos!

As to what really defines what film is all about, romantic films do not always end with the boy-gets-the-girl part nor doesn't have to be associated with anything that has something to do with the word “love” in it. To add to that comment, the film is heavily based on the real-life CBS television show I Love Lucy featuring the real-life stars Lucille Ball and her then-husband, Desi Arnaz. Director Aaron Sorkin takes the spotlight to direct this film-within-a-television-show featuring the acting duo of Nicole Kidman and Javier Bardem.

Being the Ricardos centers on the relationship between two television stars Lucille Ball and Desi Arnaz as they have been threatened by the press and the studio whether they should hold on and continue their complex-professional married relationship to each other in real-life during their week of critical-crucial production of I Love Lucy.

Academy Award winners Nicole Kidman (The Hours) and Javier Bardem (No Country For Old Men) starred in the film as Lucille Ball and Desi Arnaz, the main stars of the American television sitcom I Love Lucy. The pair are actually lovers in real life, but in the end, they split. As Kidman struggles to portray a real-life television actress and a housewife altogether, she seems to be really good at it on her own meatier part. She brings a lot of mighty feminist power against men at all odds as a main signaling message about films and television shows, which is one thing many Oscar contending actresses should do. Bardem, on the other hand, really killed it as a real-life television actor, a talented singer, and an ordinary average (though somewhat absent-minded) husband. He certainly knows his own pros and cons whenever a fellow actress or filmmaker needed him.

Although the title is very misleading as there isn’t any character with the name Ricardo in it, the film is nonetheless directed by Aaron Sorkin who wanted to give this film a refreshing take on I Love Lucy as if it looks like he wants to make a new episode for that show. He is known for writing the The Social Network, directed by David Fincher, and recently helmed The Trial of Chicago 7, for which he received a nomination for Best Original Screenplay Oscar. For Sorkin’s directorial duty on this, he shoots for the big and small screens on this one as he knows what he’s been doing on every step and direction out of the way. He is really what makes the story completely organized and roughly smooth from start to finish until it reaches the climax between Kidman and Bardem with huge amounts of nervousness, intensity, and shocking displays of color bloating around the set. On the side note, the production designs, the editing, and the cinematography seem to be in order likewise.

The film is sorta like a mystery as lots of people, the media press, and the audiences wanted to find out if these two I Love Lucy actors are actually married couples. Some parts of the film contained documentary-like scenes using some actors to act as real-life I Love Lucy filmmakers to make it look like they are still living today. In addition, some of the scenes are shot black-and-white to match the representation of the show and the setting, which is what Aaron Sorkin really wanted as he needs to keep this film as accurate as the 1950s CBS television sitcom. And for that matter, Lucille and Desi’s children, Lucie Arnaz and Desi Arnaz Jr. came onboard as executive producers of the film.

Being the Ricardos is a great film, despite its misleading title. It clocks around at least 125 minutes, but it’s a movie criteria that meets its steady procedures for any romantic films and Oscar worthy films and contenders. Kidman and Bardem really fit the bill for their chemistry acting and so does the rest of the cast, but Kidman really outshines them all. I’m pretty sure that, despite the film being any greater, people will start to complain about married couples kissing and touching each other right there, but I think those reflect in real-life today and are part of the plot that demands them. So if you want to watch this, you can, but I highly recommend watching the television show first (or at least a couple episodes of it) before heading on over to this film. It’s a film that gave Amazon Studios a run of its money.

Email ThisBlogThis!Share to TwitterShare to FacebookShare to Pinterest
Labels: Being the Ricardos review, Henry Pham