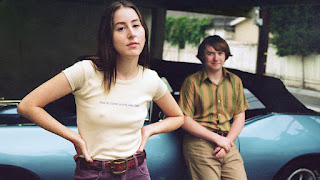 Licorice Pizza is certainly one of the year end’s greats.

Director Paul Thomas Anderson is always a San Francisco type-of-guy, using his own experiences to craft such touching, remarkable stories in his entire life. But that’s how any ordinary filmmaker can do technically, because his ways of sporting the San Francisco colors are something to build a “powerful story-telling momentum" as they say, just like some viewers and other critics who start asking what goes around, comes around on this two-hour mark about what the movie is going to be truly about. While he serves as a head writer for this film, Licorice Pizza features the main newcomers of Alana Haim and Cooper Hoffman.

Paul Thomas Anderson’s Licorice Pizza takes place in 1973 and follows the story of two lovers, Alana Kane and Gary Valentine, who are growing up, running around town, and going through the treacherous navigation and meaningful definitions of first love while living in the San Fernando Valley.

Alana Haim portrays Alana Kane in the film while Cooper Hoffman, the son of the late Philip Seymour Hoffman, receives his supportive, but superior role as Gary Valentine, a young-teenage actor who falls in love with Alana Kane. As new actors, both of them are outstanding and undeniable, mentoring each other onscreen and off the set while learning the apex predator of this dynamic acting. Even though it’s their first time acting in the film, they seem to be very natural at this and they really studied the cultural roots of young acting regardless of their age differences. For Hoffman, he certainly has the busted chops to sculpt a fully-believable and relatively-complex character, while Haim, on the other hand, is simply hilarious, charming, and attractive for many boys and male actors to glore their eyes from.

With Anderson putting his own work of art as director, the film, the editing, and the settings are also a very effective time loop. It’s not a time-traveling movie or something like that, it certainly feels like an old school California era where people enjoy their freedom, similar to what Quentin Tarantino did for Once Upon A Time In Hollywood, in my own honest opinion. It feels way more genuine and extremely impressive. Anderson not only builds the 1970s San Francisco play but he also guides us through their many assorted misadventures thanks to the chemistry between Haim and Hoffman. But hey, it’s a stealth mode and fairly easy to buy as many film directors can’t be wrong about drama or romantic films. Licorice Pizza may be a slight difficulty to watch, depending on the story or the character’s climax for the audiences but the admiration of Anderson's colorful style will likely soar up the eyes of wonder. This is one of those films where people say “great films, bad judge of characters (or direction)” for that matter.

Frankly and dearly, Licorice Pizza is one of the greatest films I have ever seen, clocking in at 133 minutes. It is probably Paul Thomas Anderson's most creative and charming movie in general. But the main event is Alana Haim and Cooper Hoffman who made this film just as exciting as ever. For much tone wise, it’s a sucker punch to learn something from any of his other movies. It's really long, but all of a sudden, it’s just a majorly enjoyable and mostly calming delve into young love into the old world (with a slight touch of abnormality in it). This film should be welcomed in the Academy Award community to be honest and this should be a great movie for everyone of all ages, despite the bad language being used in the film. I hope this film will earn lots of Oscar nominations for directing, screenplay, editing, acting, whatever. It’s absolutely magnificent to try and it’s something that cannot be ignored. And that my friends is how I live dangerously by those rules when it comes to movies.