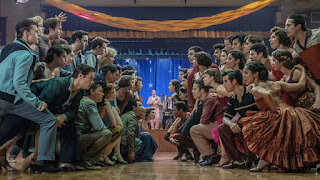 Steven Spielberg’s reimagining West Side Story brings the joyful, spectacular musical event to fans who grew up with the musical of the same name for many generations.

If you want something from Steven Spielberg, you’re in for a special treat because this new version marks Spielberg's first time directing a musical film, marking this film the second feature film adaptation, following the classic 1961 version. And of course, if you read my previous reviews about remakes and reboots at all, you must know that I have a huge distaste for them. For this one, it’s something you should give it a shot. Based on the 1957 stage musical of the same name and written by Tony Kushner, this film features the stars of Ansel Elgort and Rachel Zegler.

In this version of West Side Story, it takes place in 1950s New York City and it focuses on two young teenagers Maria and Tony whose ill-fated romance sparks the fires of the bitter rivalry between the local street gangs, the Sharks and Jets.

Ansel Elgort (Baby Driver) portrays his meatier-gangster role as Tony while Hollywood newcomer Rachel Zegler (in her feature film debut) joins in on his side as Tony’s love interest Maria. Elgort is really amazing trying to keep his musical acting elements swell without missing a beat. However, he really falls flat on some musical key numbers and scenes as if he struggles to maintain balance and delicacy when he tries his best to imitate the moves and the action for his Tony character compared to the classical version. Zegler, on the other hand, is very brilliant and stirring, giving her Maria character a bold, enduring taste in character development. The onscreen chemistry coming from them is truly magnificent as they put a tremendous amount of romantic perspectives and faithfulness to the West Side Story musicals and sources.

The whole reason why the West Side Story remake went into effect is thanks to the Academy Award winner Steven Spielberg who wanted to relive the classic 1961 film. Under his direction, the story is well told with the central themes of human being, love, and hate regardless of the differences of anyone. He knows how these messages impact many people’s lives no matter what differences they have from the past. It’s a voice that needs to be spread and shattered from silence and it is something many people in real-life take for granted as of today. So, he took matters into his own hands by taking advantage of this classic film and turned it into something free and creative while still following the footsteps from musical film director Robert Wise, Jerome Robbins, and cinematographers who have worked on this beloved original film.

With this new version of West Side Story, the pieces are all in place with well-said execution of all the dynamics within. The modernized, nostalgic musical numbers and the stirring choreography orchestrated by Justin Peck are absolutely well-handled as if the setting looks like the present day New York. Especially the music coming from Leonard Berstein, with lyrics produced by Stephen Sondhiem and score arranged by film composer David Newman, are exquisite and flawless. The acting-dancing casts, the filming crews, and the music mix-ups are very genuine as they knew that it takes a lot of commitment, pride, and dedication to provide and rehearse the musical pieces without fail. Musical films are hard work but it’s important to remember it takes a lot of musical dancers and actors to find and get back onto the right beats per measure without rushing or dragging. With that, this film meets all of its demands, the scope, and musical roots, better than what most recent Disney live-action remakes would have.

While the Jets and Sharks cast did a super-duper job nailing their acting and dancing routines, the film also includes the talented, wonderful actors and dancers present in the film; Ariana DeBose (Disney+ Hamilton) as Anita, David Alvarez as Bernardo, and Mike Faist as Riff. And surprisingly, for a huge bonus points to make this film nostalgically, we have the returning Rita Moreno, who won Best Supporting Actress Oscar for her performance as Anita in the 1961 film adaptation of the musical, appears in the remake in her new role as Valentina and serves as an executive producer for this film.

With many colorful-modernized dancing numbers, emotional tones, and beautiful reviving choreography, Steven Spielberg’s West Side Story is a spectacular, musical event, lying down to be one of the greatest musical films of all time, chipping in at 156 minutes. I really loved the film as this film holds a very special place in our hearts, eyes, minds, and the upcoming Academy Awards ceremony who, admittedly, all grew up with the 1961 version. So, kudos to 20th Century Studios, Steven Spielberg, the cast, and the crew (mostly Rachel Zegler, Ariana Debose, and Rita Moreno) who all did a marvelous job telling stories about breaking the sound barriers about social acceptance, diversity, and the future of humankind. Steven Spielberg always gets away with the classics and remakes. Once the film is released, you really should watch it right away, or maybe on Christmas Day as your Christmas gift for an outing.