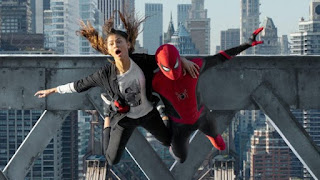 
By the end of Spider-Man: No Way Home, we really have no idea what is ahead for Peter Parker and his web-slinging alter ego. That is probably the best thing about this multi-purpose second sequel featuring this iteration of the character, who has always fit into the Marvel Cinematic Universe the way a cog fits into a machine. This has been true for some characters in the universe (The recent deluge of television series seems to be working hard to remedy that for those secondary heroes, to be fair), but possibly none of them more than Tom Holland’s version of Peter/Spider-Man. Having been introduced during the heroes-fracturing civil war and the more cosmic one that led to his and so many others’ disappearance, this Peter’s existence has itself always been a loaded scenario.

That made the two previous adventures so surprising and, in their own way, the definitive vision of the dichotomy between Peter and Spider-Man onscreen. In those films, the hero faced two of the best foes in the franchise’s decade-plus history: Both challenged the legacy of Peter’s fallen mentor and his own heroic aspirations, and both were gratefully small-scale in comparison with some of the more intimidating villains this franchise has seen. His newest adventure goes a lot bigger and more multi-dimensional than the previous ones did, and even though the movie technically proves the old adage about bigness and its relationship to betterment, it is an expansive, fittingly emotional, and surprisingly loose and funny installment in both its immediate franchise and the larger one surrounding it.

We pick up precisely where the previous adventure left us: Quentin Beck/Mysterio (Jake Gyllenhaal) has revealed that Spider-Man’s secret identity is Peter Parker, courtesy of J. Jonah Jameson (J.K. Simmons) and his “InfoWars”-inspired video channel. This sends Peter’s life into a spiral of unwanted attention, which eventually extends to his girlfriend MJ (Zendaya) and his best friend Ned (Jacob Batalon) when none of them receive scholarships to the university they jointly wish to attend. This gives Peter a bright idea: ask fellow world-saver Dr. Stephen Strange (Benedict Cumberbatch) to cast a spell that might make everyone forget what Mysterio did.

Of course, the spell isn’t quite that straightforward, says Strange, and an interruption in the complexities of it leads to an unthinkable consequence: The fabric of space and time is ripped open briefly by their actions, and some new foes appear – well, new to this Peter, in any case. We remember them quite well: Willem Dafoe’s Norman Osborn/the Green Goblin and Alfred Molina’s Otto Octavius/Doctor Octopus from Sam Raimi’s Tobey Maguire-starring trilogy and Jamie Foxx’s Max Dillon/Electro from 2014’s Andrew Garfield-starring The Amazing Spider-Man 2 (There are two others, portrayed a little awkwardly by the characters’ digital forms, but these three are the genuinely significant ones). That’s about it in terms of revealing what role these villains will play in this story, as well as any other details about how the timelines of those films might intersect (accidentally or otherwise) with this one.

What can be revealed is that two plans emerge, with one eventually taking precedence. Strange’s coldly pragmatic idea is to send them back to their fate (death in three of the five cases). Peter, with his heart in the right place, can’t let that happen and plots to change the hearts and minds of these villains for good. What follows is a consistently unexpected and often absurdly funny trip through the cinematic past of Spider-Man onscreen – though, to returning director Jon Watts and screenwriters Chris McKenna and Erik Sommers’s credit, not by way of a time heist in the tradition of what saved the universe a few movies ago. We get other cameos, as well as a high-flying climax atop the Statue of Liberty (under renovation of a very peculiar kind) that features a most unique team of allies for Peter to fight alongside.

That climax balances heart and a healthy sense of humor with a paradigm shift within the stakes of Spider-Man’s story and the universe-shattering events that seem to be defining this phase of the cinematic universe. Almost miraculously, though, Peter/Spider-Man remains at the center of Spider-Man: No Way Home, a movie that does a whole lot (indeed, perhaps a little too much) but never loses sight of its hero. That’s a superpower in its own right.