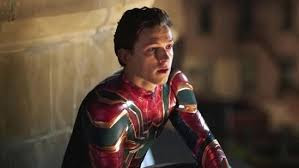 Marvel and Sony have been very secretive about this sequel. For those wondering, most of the footage from the trailer for “Spider-Man: No Way Home” is only from the first hour of the film. There are plenty of surprises in store for viewers. “No Way Home,” director Jon Watts third outing with the character, picks up exactly where the previous Spider-Man film left off – with the world discovering that Peter Parker (Tom Holland) is Spider-Man thanks to a newscast from J. Jonah Jameson (J. K. Simmons) of “The Daily Bugle.”

It’s no surprise that this revelation comes with big consequences for Peter, his friends MJ (Zendaya) and Ned (Jacob Batalon), and his Aunt May (Marisa Tomei). The opening scenes deal with all of them struggling with the frenzy of attention from the media, law enforcement, and civilians. Watts takes a handheld approach with the camerawork in these opening sequences, giving the movie a grittier, less polished feel. The movie starts on rough footing, taking a while to ease into its flow.

Looking for a way to return life to some semblance of normal, Peter turns to Dr. Strange (Benedict Cumberbatch) for help. Peter convinces Dr. Strange to perform a spell that will cause the world to forget that he is Spider-Man. When the spell goes wrong, dangerous foes are unleashed.

Screenwriters Chris McKenna and Erik Sommers have crafted the most entertaining of the current phase of Marvel movies. “No Way Home” has an energy that’s been lacking from the other Marvel films released this year, “Black Widow” and “Eternals.” “Eternals” was somewhat of a departure from Marvel’s usual type of movie (which was a pleasant surprise despite the movie not being among the best the studio has released). They continue this trend with “No Way Home,” attempting to create a unique experience using the character’s prior films.

As for the action sequences, they all feel slightly familiar. There’s a fight between Dr. Strange and Spider-Man that feels like it was ripped straight out of Christopher Nolan’s “Inception.” Derivative or not, the scene is admittedly still a feast of visual effects, perhaps showing us a glimpse of what’s in store for the soon-to-be-released Dr. Strange movie. The sequences where Peter fights the film’s multiple villains could have come from any Spider-Man movie. The same can be said for the shots of Peter swinging through New York City. Watts isn’t trying to reinvent the wheel with the set pieces.

“No Way Home” doesn’t have any trouble filling its lengthy runtime, nearly two and a half hours. There are multiple characters involved in this story, necessitating that Watts perform a balancing act to give them all appropriate screentime. The pacing is well handled, flowing smoothly from sequence to sequence. Although, the lack of filler sequences could mean some viewers will struggle to hold their bladders for the entire length.

While Watts’ movie isn’t as good as its predecessors, it’s still a fun, entertaining superhero movie. In spite of its shaky start, “No Way Home” is able to overcome this to deliver something memorable. The action sequences might not be much to write home about, but Marvel has managed to raise the bar again with what superhero movies can do.