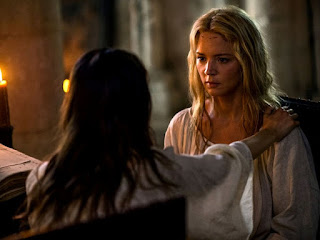 Director Paul Verhoeven is known for pushing boundaries with his films. His latest, the 17th-century set “Bendetta,” is no different. Although, in this case, the film, about a nun, is also considered blasphemous and is already causing scandal among religious groups.

The movie, based on a true story and a book by Judith C. Brown entitled “Immodest Acts: The Life of a Lesbian Nun in Renaissance Italy,” follows the titular nun Benedetta (Virginie Efira). As a youth, Benedetta was pledged to the church. She told everyone she encountered of her relationship with the Virgin Mary, who did everything Benedetta asked of her. A band of thieves attempts to rob her and her parents on their way to the convent. The attempt is thwarted after Benedetta speaks up to the leader and an act of nature is seen as a response from the Virgin Mary.

As an adult, Benedetta begins to have visions. Many of these involve Jesus, who proclaims that she is to become his wife. At times, the visions are violent and Jesus saves her from danger.

Shortly, Verhoeven introduces a new nun, Bartolomea (Daphne Patakia). Bartolomea has a history of abuse, seen joining the convent as her father attempts to beat her. She quickly takes a liking to Benedetta. The film includes a scene where Benedetta and Bartolomea bond while pooping. The two women soon begin a secret, physical affair.

If any of the above descriptions cause you even a bit of discomfort, it’s probably a good idea to seek out a different film for your viewing. From here, Verhoeven only further pushes the boundaries. Religious folks will especially find this movie distasteful – there’s a scene involving a statue of the Virgin Mary being used for carnal pleasures. The viewer is left to decide whether this is art or trash.

The always great Charlotte Rampling also stars as the convent’s abbess, Felicita. She (and her daughter) is the voice of reason within the convent. As Benedetta’s visions get more intense, resulting in the appearance of stigmata, she questions whether Benedetta is truly performing miracles or is she just a madwoman inflicting these wounds on herself.

From a filmmaking perspective, “Benedetta” doesn’t really do anything remarkable. The cinematography and production are fine, though nothing we haven’t seen before. Performances are likewise good although no one really sticks out as giving a spectacular performance here. At times, Efira goes into loud vocal spells, reminiscent of the demonic voice in “The Exorcist,” that are impressive, showcasing the actress’s ability to change character at the drop of a dime.

Altogether, this movie didn’t really do much of anything for me. I’m more than a little surprised at the acclaim I keep hearing for it (and the fact that it’s made multiple best-of lists for this year). It’s not a horrible movie though it is easy to see why some would hate it. I’d say that “Benedetta” is average at best.