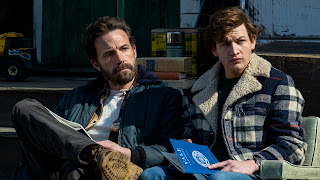 Movies about fathers and sons have been a thing since the dawn of time in Hollywood, but for some films that highlight the relationship between the two may or may not be as emotional as it gets. Usually, it’s not just focused on just dads and sons, sometimes it focuses on other family members who have been a father or mother figure to their own child[ren]. The Tender Bar is based on the 2005 memoir of the same name written by the real novelist J.R. Moehringer. Actor, filmmaker, and Academy Award winner George Clooney, who recently directed The Midnight Sky, receives another directorial gig to helm this piece. The film features Ben Affleck, Tye Sheridan, Daniel Ranieri, and Lily Rabe.

The Tender Bar centers on a young boy named J.R. Moehringer who seeks a replacement for his father, who disappeared shortly after his birth, and bonds with his uncle and his fellow patrons at his uncle’s bar. As he does so, he is soon inspired to become a writer when he learns what his life has turned when his uncle became a father-mentor figure to him as he desperately tries to search for his real father.

The film serves as an acting debut for child actor Daniel Ranieri who carries the main role as young J. R. Moehringer throughout the film while Ben Affleck mentorly (and supportingly) appears as Uncle Charlie who runs a local bar in town. As an actor, Ranieri is learning about acting as well as taking lots of humorous advice from Affleck while working constantly together on and off the set. He seems to be enjoying doing this, but on the inside, Ranieri puts more effort and heart to his character portrayal. Affleck, on the other hand, is great and figuratively serves as a great mentor for young J.R. throughout the plot. He gives some really interesting parts to the film when it comes to bonding with someone in the family, spreads some child-and-adult humorous dialogue along the way, and plays the key role for the film’s story and progress. Tye Sheridan (Ready Player One) also portrays the role as the present day J.R. who is seen going off to Yale University while actress Lily Rabe (American Horror Story) graciously appears on J.R.’s side as his supportive but single mom throughout the film. Sheridan is wonderful despite some on and off screentime, but the main star of the show is Rabe. Rabe is amazing right there, showing how mothers bring some heartfelt moments and life’s greatest advice while taking care of a son as he grows up to be a happier person.

With Clooney’s direction, the plot feels empty and emotionless as the film only focuses on J.R. ‘s life and not the bar itself. The bar setting, shown in the film, becomes the main attraction for the film’s entirety where J.R. and Charlie’s true happiness lies ahead as they grow up to learn drinking, smoking, family life, and education without having to go to school thanks to Clooney’s R-Rated directorial intake and the unintentional script-writing coming from Oscar screen-writing winner William Monahan (The Departed). Even the strong language in this R-rated film doesn't seem helpful enough to increase higher points. While there’s a lot of darkness and depressing moments upon seeing the drinking and smoking scenes, Clooney, however, did demonstrate the bonding chemistry between Affleck’s Uncle Charlie role and Ranieri’s J.R. role, which is very emotionally effective that can teach most fathers and uncles a powerful lesson, even for myself too. This is a film where lots of people need to take upon whilst looking after one another in their lively adulthood.

Also present in the film are Christopher Lloyd (Back To The Future trilogy), Sondra James (Joker), Briana Middleton (also her acting debut in a feature film), and Max Martini (Saving Private Ryan). They both played as Grandpa, Grandma, J.R. 's ex-girlfriend Sidney, and J.R. 's estranged, alcoholic father called “The Voice,” who is also a radio host. Just FYI news to you, this is Sondra James’ final film at the time of her passing.

I’m not really picky about movies, but The Tender Bar is not a good 100-minute movie, just average, but not so terrible. Though only the actors Affleck, Sheridan, Ranieri, and Rabe did a terrific job on their acting roles, which is what makes this film nice to enjoy. Everything else, not so much. Hate to disagree with you, but I think this movie is not worth my time. Maybe it’s a good one if you’re a Ben Affleck type-of-guy. So, sorry to say this, but this film is a hard pass due to Clooney's inconvenient directing style, boring screenplays, and lack of heart they put much through.