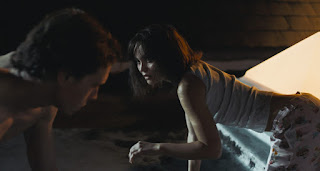 Written and directed by Nathalie Biancheri, “Wolf” is an oddball slice of cinema. Biancheri centers her drama on a disease called species dysphoria, a mental disorder where the sufferer believes that they are actually an animal stuck in the body of a human. In the case of protagonist Jacob (George MacKay) that animal is a wolf.

In the facility, Jacob interacts with other patients with the same disease. Among them are patients who think they are a wildcat (Lily-Rose Depp), a German shepherd (Fionn O’Shea), a parrot (Lola Petticrew), a horse (Elsa Fionuir), a duck (Senan Jennings), a squirrel (Darragh Shannon), a spider (Amy Macken), and a panda (Karise Yansen). Jacob and wildcat quickly form a relationship. Wildcat appears to be close to overcoming her affliction (she’s given certain freedoms within the facility) but the relationship with Jacob seems to cause her to backtrack.

The action of the film takes place almost entirely within the confines of the treatment facility where Jacob is admitted at the start. The doctor (Paddy Considine) in charge of the facility uses harsh and inhumane methods on his patients, implying that the film is meant as a sort of indictment of mental health treatment. Patients are seen being guided around the grounds with collars and leashes and, if they are bad, bound and locked in cages.

Despite the oddity of the premise, the actors are all entirely committed to the weirdness. At times the patients interact as humans while at others they become the animal, conversing in the mannerisms of their chosen species. The mechanics of the disease don’t make much sense. If they believe they’re an animal, shouldn’t they always act like that animal? There is a lot of footage of MacKay and Depp roaming the halls at night as their respective animals. Their nighttime adventures raise many questions about the ineptness of the doctor and his staff. If these patients are known to prowl as animals, shouldn’t there be safeguards in place to prevent these nightly outings?

There is little story to “Wolf.” It mainly exists to offer viewers a glimpse into this strange world. Even with a fairly short runtime, “Wolf” feels like it plods along. Despite the cruelty of the doctor, it feels like there is little to no conflict within the story and there’s no growth to any of the characters. If Biancheri intended some deeper allegory to the story and characters it was completely lost on this viewer.

At least the photography from cinematographer Michal Dymek is interesting. He gives the visuals a suitably cold and aloof appearance, mirroring the environment that Jacob finds himself in. Although, the film’s cinematography gives off strong vibes of other arthouse movies.

Ultimately, “Wolf” is a movie that doesn’t entirely satisfy. It’s got an intriguing idea but doesn’t do much with it. There are too many moments where you feel like you are forcing yourself to continue watching for it to be a pleasurable experience (if you could call this type of story a pleasurable experience). Although this isn’t a particularly great movie, I’d say this is worth a watch with one caveat – make it a rental rather than a theatrical excursion.