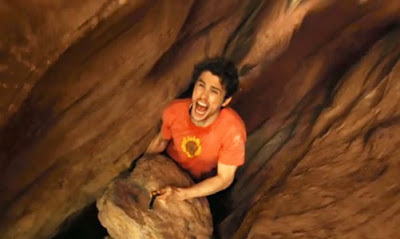 Aron Ralston's harrowing account of when his arm was wedged by a falling boulder near Moab, Utah is faithfully brought to the screen by director Danny Boyle who wrote the screenplay with Simon Beaufoy both of Slumdog Millionaire from Ralston's book Between a Rock and a Hard Place.

In 2003 Ralston (James Franco) decided to tackle Robbers Roost a canyon that was a outlaw hideout in southeastern Utah. An avid outdoors man Ralston parks his SUV and bikes in 17 miles before hiking the rest of the route. Along the way he meets 2 young women hikers Megan (Amber Tamblyn) and Kristi (Kate Mara) showing them a cave pool that they can dive into from a precarious position between some rocks. They part ways after they invite him to a party. They are the only ones that know of his destination and purpose. Ralston fails to tell his co-worker and friends, or even his parents about this trip. He's a lone adventurer sure of his skills and challenging his endurance. He's equipped with plenty of rope, climbing supplies, and a couple liters of water although he did miss taking his Swiss Army knife. While negotiating the descent into the tight canyon a large heavy boulder becomes loose and both it and Ralston drop almost to the ground. Ralston's right arm is caught between the canyon wall and the rock. Pain and shock doesn't immediately vex him. He's cool calm and collected as he desperately tries to move it, but it's firmly stuck. He assesses his equipment, realizes he only has a dull multi-tool. All the while he's documenting his predicament with a digital movie camera. Those images were never seen except by his mother who allowed the filmmakers and Franco to view while making the movie.

Franco is impressive and may be an early candidate for the Oscar race with his portrayal in which he lost 25 pounds during the linear shoot. The photography is spectacular from the dense city, to the open forbidding countryside, to the claustrophobic crevices. We witness Ralston's 5 day ordeal while weak from hunger and lack of water he begins to hallucinate and face maybe his eventual doom. It's been reported that some of the scenes have made people faint at earlier screenings. It is definitely squeamish but even after he takes off his arm to free himself you may feel almost relieved. Not a movie for everyone it's worth the 90 minutes for the most intense 127 hours ever. You walk away with a different outlook on your troubles, and the lesson that you should tell people where you are going.
(Review by reesa)

Posted by Dallas Movie Screenings at 1:56 AM