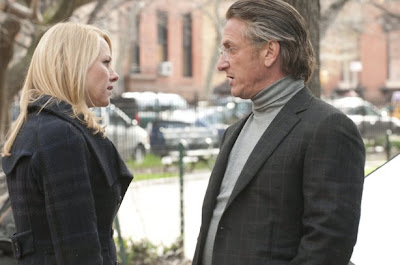 In 2003 former ambassador Joseph Wilson wrote an op-ed in the New York Times called “What I Didn't Find in Africa” which disputed the Bush administration claim of Iraq having WMD's which justified going to war 4 weeks earlier. A week later Wilson's wife, Valerie Plame Wilson was revealed to be a CIA operative. The “outing” of Plame seemed to be in retaliation and a redirection of attention to discredit Wilson's article.

Based on Plame's Fair Game: My Life as a Spy, My Betrayal by the White House, a fascinating account of how the US government basically destroyed the private lives of the Wilson's for it's own agenda. Naomi Watts is very effective as Plame who worked in the CIA's counter-proliferation division which was investigating the existence of weapons of mass destruction in Iraq. A few weeks after 9/11 Plames diplomat husband (Sean Penn) is sent to Niger because he had previous contacts in the country to substantiate the alleged sale of enriched uranium. Despite Wilson's report that no sale could be proved the US administration ignores his findings. Instead it takes the allegations and couples it with another CIA agents' report that metal tubes shipped into Iraq could be used for creating nuclear weapons. Plame had originally seized one of the shipments and questions their use as they were the wrong size and structure. Suddenly the Vice President's Chief of Staff Scooter Libby is making visits to the CIA's office with pointed questions trying to manipulate the information on the uranium and metal tubes. Then just as quickly the country goes to war.

After Wilson's article, Plame is revealed in a newspaper column by conservative pundit Robert Novak that Valerie Plame Wilson was a CIA operative in an attempt to discredit his article. Plame's overseas contacts and operations were put in serious jeopardy once her cover was blown. The newspapers and news stations ran with every rumor and disinformation that they were traitors was devastating to her family. Rather than give up, Wilson fought back which eventually lead to the federal investigation that convicted Libby (whose sentence was later commuted by Bush).

Director Doug Liman who was at the helm of Bourne Identity worked with a script by Jez Butterworth and John-Henry Butterworth from Plames' book and Wilson's The Politics of Truth. Well paced and acted, Sean Pean never disappoints as the frustrated articulate husband. His speech at the end of the film is the kind of movie magic that inspires as well as makes you think. Watts is just as cool and collected as a spy. When her world falls apart it's heartbreaking for a woman who prided herself in her training to handle the most difficult situations. It's a fascinating and shocking revelation of the Bush administration's culpability in the WMD controversy. Even scarier to think that after years of serving her country that she and her family could be dragged through the mud just to get the public to look elsewhere. Unfortunately the younger audiences will not be able to appreciate the lessons learned from these events as they will not attend movies without mindless mayhem.
(Review by reesa)