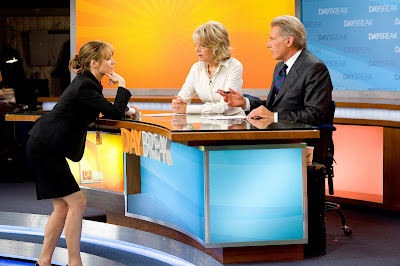 Becky wakes at 1:30 am each morning for her job at a small New Jersey TV station as a producer for a morning show. The day she thinks she's getting a promotion ends up with her getting laid off to be replaced by a newly graduated guy with more business potential. Her dream of someday working on NBC's Today show is suddenly dashed.

Becky (Rachel McAdams) doesn't give up despite her mother's (Pattie D'Arbanville) warning that perhaps she should find another field. She barrages the broadcast world with her resume and never ending follow up calls until one day IBS network calls with an interview for an executive producer on their low rated Day Break show. The program had been on for 40 years, but is getting slaughtered by the major networks. It's gone through 18 executive producers in 11 years, and everyone thinks that Becky will be just another one to fail. She pleasantly suprises everyone by immediately firing the lecherous co-anchor and manages to manipulate hard nosed and out of work newsman Mike Pomeroy (Harrison Ford) to join long time anchorwoman Coleen Peck (Diane Keaton) as co-host. Pomerory unhappy with the new gig exercises his right of story approval and not to do human interest stories or cooking segments. He mainly sits, glares at everything and even refuses to use the word “fluffy” in a promo. The network is not happy and is going to pull the plug on the show. So Becky challenges her boss Jerry Barnes (Jeff Goldbloom) that if she can bring up the ratings in 6 weeks, then the show can have more time to develop. Becky doesn't tell anyone about the shows' possible demise, and tries every trick she can think of to bring excitement back into the show. Segment ratings are improving, morale is high, but only Pomeroy remains stoic and dry.

With the pedigree of Notting Hill director Roger Michell and Devil Wears Prada writer Aline Brosh McKenna and the luminous Rachel McAdams, Morning Glory is like a bright fresh rom-com with very little rom. Becky has more romance for her job and the biggest relationship is the bantering battling between Becky and Pomerory. She apparently can't be away from her phone long enough to carry on with her handsome colleague Adam Bennett (Patrick Wilson). The camera happily concentrates on pretty McAdams with a smile that made Julia Roberts so memorable. Coleen Peck calls Becky “Gidget” for her irrepressible upbeat and positive attitude. No matter what catastrophe is on the horizon, Becky takes a deep breath and hits it straight on. It's nice to see Ford doing more comedic roles, and Diane Keaton is good as expected playing the morning TV hostess Diva who is willing to help Becky make the show succeed. You can't go wrong with Morning Glory. Some nice laughs, good cast, energy level and everything you can predictably expect.
(Review by reesa)