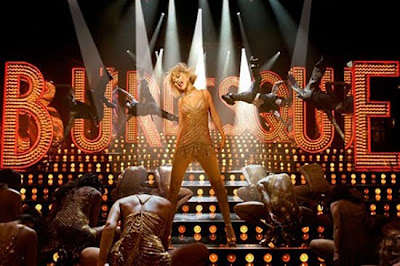 The word Burlesque conjures images of scantily clad women with pasties doing a bump and grind on stage to a unrelenting drum beat. Today's Burlesque revival is more like performance art, parody, and a suggestive tease show. Director/writer Steve Antin's version is more of a showcase for bigger than life Cher as Tess, the owner/performer of a soon to go under Burlesque theater in downtown Hollywood and Christine Aguilera as Ali, the young woman from Ohio with a huge voice.

Ali was working as a diner waitress in small town Ohio when she bought a one way bus ticket to LA to seek her fame and fortune. Armed with the want ads hitting all the places looking for singers and dancers, she wanders in the Burlesque club and becomes completely enchanted. The bartender wearing man-liner Jack (Cam Gigandet) sends her backstage to speak with Tess. Tess is too busy dealing with Nikki (Kristen Bell) who is the main headliner has a drinking problem and chronically late for work. Another of her dancers has just discovered she's pregnant. Not to be put off so easily by Tess, Ali grabs a tray and starts to wait tables. The next day, Tess intrigued by her spunk lets her to continue to work. Meanwhile Ali moves in with Jack when her hotel room is robbed. She thinks he was gay, but discovers he's engaged and his fiancé is in NYC looking for acting jobs. So they begin a teasing platonic relationship. After much persistence Ali gets a job dancing, but when a jealous Nikki pulls the plug on a lip synced number to humiliate Ali. Only Ali starts to sing and blows everyone away.

Vince (Peter Gallagher), Tess's business partner ex-husband, is trying to get Tess to sell the club to real estate tycoon Marcus (Eric Dane) who wants to turn the site into skyscraper condo's. Despite the fact they need to come up with the back mortgage or the club will return to the bank in a month, Tess refuses to sell. Tess believes with Ali's talent will help save the club. Unfortunately it may be too late.

Burlesque has more energy and visual pop than recent cinematic musical attempts with bigger named talent like Nine or even Chicago. Christina won't be winning any awards for her thespian skills, but her voice is always a pleasure although it seems to lack sufficient “soul” to pull off some of the diva tunes. Cher belts out an over wrought power ballad in that deep earthy voice, but she's beginning to look like one of her many transvestite impersonators. Stanley Tucci has the stereotypical role of the gay costume director and Alan Cummings gives a Cabaret nod in some musical romps. No big surprises in the story, it's pretty much been done before. Just sit back, suspend belief and just enjoy the well staged song and dance numbers. You will be entertained.
(Review by reesa)