The Next Three Days 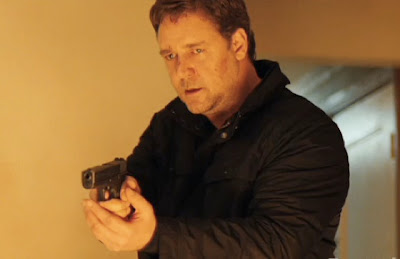 John Brennan and his wife Laura are out to dinner with his brother and his wife. The women are in a heated discussion about how women are harder to work with than men when Laura mentions she had a loud argument with her female boss. Despite the uncomfortable dinner, John and his wife make love in their car before going home. The next morning as Laura is getting ready to leave for work she notices a red stain on her coat. Suddenly the police are at the door arresting her for the murder of her boss.

John (Russell Crowe) is a teacher at a community college. He's a bit pasty, slightly paunchy but strongly believes in his wife's innocence. Even after she is convicted and sent to prison John struggles with the demands of work and raising their young son who is withdrawn to his mother. After the last appeal is rejected, Laura (Elizabeth Banks) becomes suicidal and John realizes his only option is to break her out of prison. John as a teacher knows the importance of good research and planning. He covers his bedroom wall with information after interviewing the only person who successfully escape from the prison that Laura is housed. Damon (Liam Neeson) shares the difficulty he faces including the times he needs get out before road blocks are set up. The details are plotted on a map on John's bedroom wall as he searches for the anomalies in the prison routines. His first attempt to make a key that would open doors at the prison almost gets him caught. He buys drugs from street dealers hoping to find someone to make forged passports and driver's licenses which gets him beat up and ripped off. The time to pull off the escape becomes essential as Laura is going to be transferred to another prison in three days.

Under Paul Haggis direction and screenplay, The Next Three Days is a remake of the 2007 French film Pour Elle. At first Russell Crowe seemed out of place as hapless husband. There's not enough time between John and Laura to establish the closeness of their relationship. But the role works well with his particular brand of intensity. Crowe's ordinariness creates a real man doing something extraordinary when faced with a miscarriage of justice. Banks fluctuates as the mom hurt to the heart by her uncommunicative son, angry by the system that put her in prison, and scared to death by her husband's plan to get her out. Brian Dennehey has a small unappreciated role as Brennan's father who understands the need of his son to protect his own. The eyes glued to the screen escape sequence will keep the audience at the edge of the seat as pieces fall in and out of place so you never know just what to expect. Nicely paced with good performances, especially Crowe who inhabits his characters so that you forget it's the Gladiator with a Beautiful Mind. This film is definitely worth a large bag of popcorn.
(Review by reesa)

Email ThisBlogThis!Share to TwitterShare to FacebookShare to Pinterest
Labels: The Next Three Days review