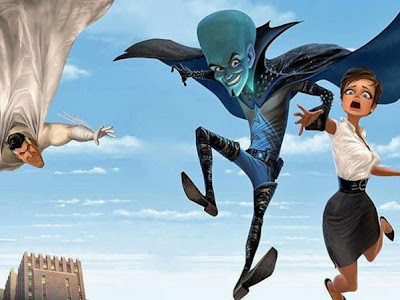 An infant son is shipped out into space to survive a dying planet by his parents like in the original Superman. At the same time, another child is also hurtling through space both towards earth. While one lands at the home of nice wealthy people happy to have a child, the other lands at a prison yard where he's brought up by convicts.

Megamind (Will Ferrell) prides himself on being the master of evil with his feisty fish-like sidekick, Minion (David Cross). While his arch-enemy Metro Man (Brad Pitt) is the hero of Metro City, with Superman type powers, he's strong and beefy and full of himself (looking more like Clooney than Pitt). Metro Man has consistently defeated Megamind's devious plots for many years. That is until one day day in a botched attempt to kidnap Metro Man's “girlfriend” Roxanne Ritchi (Tina Fey) Megamind seemingly destroys Metro Man in an explosion. Megamind then takes over control of Metro City. But overtime, he realizes that his evilness does not have any punch without a nemesis to foil his plans. Megamind turns Roxanne's cameraman and persistently jilted admirer Hal (Jonah Hill) into the next superhero, Tighten. Instead the unbalanced Hal takes out his revenge on Metro City after years of rejection from Roxanne. Later Megamind discovers that Metro Man faked his demise but doesn't want to return to his previous humanity saving life. Apparently Megamind wasn't that much of a challenge for Metro Man's expertise. Mega Mind gives up and lets Tighten turn the city into his playground of mayhem. With Roxanne's encouragement's it's up to Megamind to step up and be the city's hero and get the girl too.

Director of Madagascar and it's sequel, Tim McGrath with writers Alan J. Schoolcraft and Brent Simons they have created a rehash of every old time comic book predicaments. The comedy by such an able cast performs unevenly like an awkward badly written SNL skit. Megamind is more amusing as a failed bad guy with dreams of grandeur, than as an angst ridden wannabe hero. There were no laugh out loud moments. Maybe a small smirk hoping a payoff was coming. Alas, it drags horribly. This is just another excuse to create another animated story for the kids in 3D, but you won't notice any flashy 3D effects, just the hassle of wearing ill fitting glasses. It doesn't take big named stars to make a movie worth the ticket price if the writing doesn't hold up the story.
(Review by reesa)