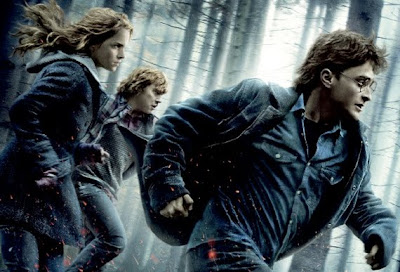 The final J.K. Rowling's book on the adventures of Harry Potter and his friends battling the evil Voldemort and his followers of the dark magic has been split in 2 parts with the final chapter coming in July 2011. If you have not seen any of the films of the series or read any of the novels leading up to this then it's really too late to start with this one.

David Yates who also directed The Order of the Phoenix and the Half Blood Prince worked with screen writer Steve Kloves who wrote all the Potter films. You can be assured that they would handle the material to satisfy the legions of costumed fans that attend in droves. Everyone knows this is just the beginning of the end. It's just hard to accept that we have to wait a ½ year to see the rest of the movie.

Picking up from the last movie The Half Blood Prince. Harry has come of age and is on the final journey to defeat Voldemort by destroying the Horcruxes (seven magical objects that hold a piece of a soul to attain immortality). The trio, Harry, Hermione and Ron, decide to isolate themselves to ensure the safety of their families and friends while they are on their quest. It strains the relationship of the 3 BFF's as they are without a plan while trying to stay away from Voldemort's soul eaters who are trying to track them down. Eventually they break into the Ministry of Magic that has now been taken over by Voldemort's followers to steal a Horcrux, then they must figure out a way to destroy it. While they ponder their predicament, they take turns wearing the magic locket which makes the wearer very paranoid and testy. It really effects Ron who gets mad and leaves Hermione and Harry on their own. Hermione also discovers some secrets about Doubledore's past and a mysterious symbol that turns out to be part of the legend of the Deathly Hallows. Part of the legend includes three magical items, the wand, those most powerful wand of them all, the stone that can bring the dead back, and the cloak that can make one invisible to death. Ron returns and with the mysteriously found Gryffindor's sword manages to save Harry and destroy the locket Horcrux. Meanwhile Voldemort finds the Deathly Hallow wand.

Daniel Radliffe, Emma Watson and Rupert Grint are all looking older but their chemistry is still the same. Hermoine is still the logical one, Harry is still full of angst, Ron is hoping that Hermoine is feeling like he feels about her. Despite the danger the characters are in, they still act like teenagers thankfully without cell phones. The film itself is dark, dismal and depressing but probably one of the better HP's to date in terms of performances and FX. There's very little humor, and everyone is constantly fighting ghostly dark smoke objects, the warped Bellatrix Lestrange (Helena Bonham Carter), and snake faced Lord Voldemort (Ralph Fiennes). Definitely not a nice afternoon with the littler kids. At 146 minutes, the time crawls as it does for Harry and gang. It just feels like we are whisked away from location to location, beautiful as it may be, without any big story arc or revelation. It's just a big piece of a puzzle that can't be finished until next year.
(Review by reesa)