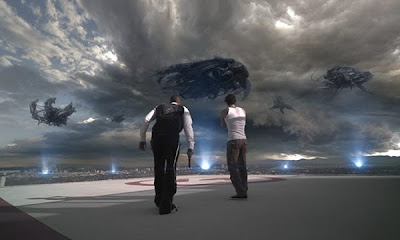 Jerrod's friend Terry is quite successful living the good life in LA. Jerrod and his newly pregnant girlfriend Elaine come to California from Brooklyn to help celebrate Terry's birthday. After a long night partying, everyone crashes to be woken up when bright lights are shining through the blinds of the Terry's penthouse apartment. The shaking building is mistaken for an earthquake. They soon realize something is seriously wrong when one of the left over party goers get sucked out the window.

Another aliens come from outer space and take over Earth story. Beams of light are coming from the sky and sucking up humans. Jerrod (Eric Balfour) almost gets enchanted by the light that does something weird to this eyes and the veins in his body. Elaine (Scottie Thompson) pulls him away in time, and he goes back to normal. The other panic members in the penthouse Terry (Donald Faison), his girlfriend Candice (Brittany Daniel) and his mistress Denise (Crystal Reed) are all freaking out as would be expected. Terry grabs his gun and he and Jerrod to the roof to check out what's going on. There are flying tentacled creatures coming out the mother ship hovering over Los Angeles. The women are wanting to stay holed up in the penthouse hoping for rescue. The guys decide they should make a run for it. The aliens don't seem to be on the water. Terry has a boat, but the marina although just minutes away, is a million miles when there's no hiding from the aliens. The grab supplies and head to the underground garage. When they get close to getting out, they realize they are in bigger trouble than they thought. The survivors make it back to the penthouse, but there's something wrong with Jerrod. He's been exposed several times to the alien light and is exhibiting weird spider veins and extra strength.

Visual effects artists the brothers Strause, Colin and Greg did the digital elephants in “300”, aged Brad Pitt backward, and cloned one actor into identical twins in Social Network. They have also directed the effects heavy AVPR: Aliens vs. Predator-Requiem. The FX is what this movie is all about. And thats about the only thing worth seeing in this film. The screenplay by Joshua Cordes and Liam O'Donnell offers an interesting predicament for the characters faced with the possible end of the human race with aliens that you can't seem to destroy. Bombs, bullets, even an ax, doesn't stop them from reforming. It's just a matter of waiting to see who buys the farm next. The tension in the first part did not sustain itself by the end of the film. In fact you pretty much get tired of the characters by that time, and you may cheer for the aliens to end the story.
(Review by reesa)

Posted by Dallas Movie Screenings at 1:29 AM