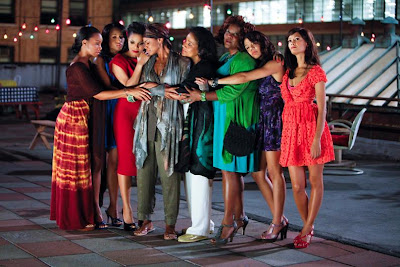 Ntozake Shange's 1975 play “For Colored Girls Who Have Considered Suicide When the Rainbow is Enuf” has been turned into a theatrical version by director/writer Tyler Perry. Nine extraordinary African-American actresses portray the characteristics representative in the 20 poems in the book. Perry tackles the unique viewpoint of women of color with issues that range from adultery, date rape, mental illness and even the down-low.

The play which had 7 women across the country reciting poetic verse were nameless only known by the colors they wore. Perry expanded the melodrama with a number of subplots involved mostly within an apartment house. Tangi (orange) (Thandi Newton) is a bartender who brings home different men every night. Next door is Ms. Gilda (Phylicia Rashad) the landlord who sits the two young children of Crystal (brown) (Kimberly Elise) who has a boyfriend just returned from military service who is off his meds abusing her and her kids. Crystal works for Jo (red) (Janet Jackson) the uptight big "b" owner/editor of Robe Rouge a flashy fashion magazine. Juanita Sims (green) (Loretta Devine) gives her what for when she she is turned down by Jo for a donation to her program at the hospital where she advices women to use condoms. Anika Noni Rose is Yasmine (yellow) who teaches dance dance to Nyla (purple) (Tessa Thompson). Nyla's and Tangi's mother is Whoopi Goldberg as Alice (white) a religious fanatic for her Temple of El Nohim. Kerry Washington is Kelly (blue), a social worker who comes to the aid of Crystal and Nyla during the course of the story. Each of these women suffer, cry, rage, and love. Each has some major crisis that needs to be addressed to the men in their lives or the women around them. Each gets a moment to shine on screen while they make their one big poetic speech on their particular blight. Macy Gray shows up half way through the story looking drunk and scary.

This is Perry's attempt at a “serious” film coming after the success of last year's Precious which he produced. Over all the characters are handled awkwardly and are too broadly drawn. The scenes jump from one to another dealing with the most sensational parts of their stories. Most everyone is over wrought and full of angst. Happiness and laughter is like a victory that can only be temporary while waiting for the next shoe to fall. They all end up at the hospital at one point. The monologues try to be organic to the scene, wonderfully performed but everyone knows in real life no one ever gets time to be able to say that much in one sitting. Even though this film is a sonnet to the African-American woman's experience, these problems are universal and for which all women of all color can relate.
(Review by reesa)

Email ThisBlogThis!Share to TwitterShare to FacebookShare to Pinterest
Labels: For Colored Girls review