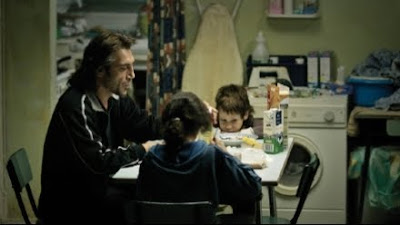 Javier Bardem is going to give Colin Firth a run for the Oscar this year with his very powerful performance in Alejandro González Iñárritu's sorrowful film. Written by Iñárritu, Armando Bo,
and Nicolás Giacobone it follows the last days of Uxbal as he tries to tie up his loose ends before his cancer kills him.

Uxbal is a devoted single dad to his two kids. He walks them to school, picks them up from the baby sitter, makes them dinner. Which wouldn't be anything special if he lived anywhere else but the poor and dirty slums of Barcelona. Clutter, dirty dishes, stained walls, leech like critters on the ceilings. He soothes his kids desires by focusing on what they say and filling that hole with his love. They are separated from their bi polar alcoholic mother Marambra (Maricel Álvarez) who is trying to get them back together again but she proves to be too erratic and abusive. Uxbal and his brother Tito (Eduard Fernández) sell their father's grave so a shopping mall could be built. Before they have him cremated Uxbal is able to look at the embalmed face of his father frozen at the time of his death while in his 20's. Uxbal is basically a decent guy, but he's a street hustler who supplies illegal African street vendors with goods to sell while paying off the police to look the other way. The goods are made by undocumented Chinese laborers where he is the middleman working with a couple of low rent gay Chinese businessmen. He also sells his services as a psychic to the loved ones of the recently deceased to help their spirits to pass on. On top of all this his doctor has told him they could extend his life a couple months if he came in for chemotherapy. Uxbal doesn't even let the nurse draw blood, preferring to stick himself with the needle. He won't go in for treatment even though he's been doubling up in pain and he has blood in his urine. Uxbal's world is dire, but despite his grim surroundings he cares for the people that he services. When one of the African vendors is arrested and deported, he sets up the man's wife and baby in his house. One of the Chinese laborers baby sits his kids. He spends his days putting out fires for all the people that intersect his life and whose money he depends on to survive. Uxbal doesn't tell anyone that he is dying, not even Marambra or his brother.

The squalid surroundings of the neighborhood, the warehouse basement full of Chinese workers sleeping on the floor, the African apartments filled with people is far from the picturesque tourist vision of the city. As in Babel, Iñárritu uses the device of random happenstance to unite the stories together and shine the light on small pieces of life that we often take for granted. But that unrelenting focus of Uxbal's world that is falling apart can drain the spirit. If it wasn't for Javier's soulful eyes and the poetic beginning and the ending of the film are the only places where peace and beauty exit.
(Review by reesa)

Posted by Dallas Movie Screenings at 2:46 AM