First Look at Fincher's Girl With the Dragon Tattoo 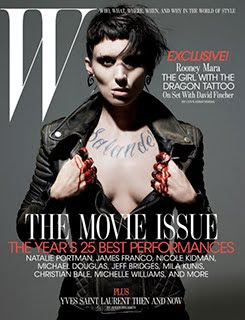 
Check out Rooney Mara as Lisbeth Salander the androgynous, bisexual computer hacker from Stieg Larsson's best seller The Girl With The Dragon Tattoo. The original movie by Director Niels Arden Oplev was recently voted Best Foreign Film by the North Texas Film Critics Association. Never a big fan of remakes, it will be curious to see what director David Fincher will do with the cast the includes Daniel Craig (James Bond) and little known Rooney Mara (The Social Network). The picture from W doesn't look like they will stray far from Noomi Rapace version. But according to the article, Fincher and screenwriter Steven Zaillian, who wrote Schindler’s List claims it's departs dramatically from the book and changed the ending. This is cringe worthy enough when they change the source material, but we will just have to wait and see when it's released in December.

Email ThisBlogThis!Share to TwitterShare to FacebookShare to Pinterest
Labels: The Girl With The Dragon Tattoo