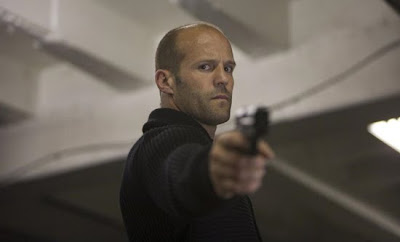 Arthur Bishop is an elite assassin known for his efficient and super stealth abilities in carrying out his job. He's able to take out a ruthless target who is swimming in his indoor pool with his house surrounded by a private army of body guards and make it look like an accidental drowning. Bishop is vexed by his next assignment which turns out to be his mentor and the closest person in his lonely life, Harry McKenna.

Jason Statham has created a niche in the B-movie bruiser category. He's handsome, stoic, detached and the British accent gives him an edge. Arthur Bishop is a classy guy with his beautiful house located in the middle of the bayou, plays classical music, has the best equipment that money can buy and is also rebuilding a beautiful vintage car. His only human contact outside of Harry (Donald Sutherland) is Vaughn an old guy who watches his boat and a beautiful prostitute who doesn't even know his name. His main employer Dean (Tony Goldwyn) and Harry's partner tells Bishop that Harry has been responsible for the death of a team of operatives in South America and had embezzled the money from the job. Bishop is disappointed in his wheel chair bound associate but takes him out anyways. Bishop takes on Harry's troubled son, Steve (Ben Foster) out of obligation to his old friend. He begins to train him in his craft. Steve has a bit of aptitude for the profession, but he's also got a wild side. On his first assignment he's supposed to poison his target, but Steve's hunger for more action almost gets him beat to death. Dean is not happy that Bishop has taken on an unsanctioned employee especially when the last job doesn't come off as a clean kill. Soon the duo are facing being eliminated themselves.

Director Simon West who's first film was Con Air knows his way around action flicks. The film is a remake of The Mechanic with Charles Bronson updated by screenwriters Richard Wenk and Lewis John Carlino who wrote the original movie. The first film is a classic which this doesn't come close to matching. Statham has cornered the market on the cool demeanor and signature scowl. There's also the obligatory shirtless scene, thankyouverymuch. You have to suspend belief and not look to closely to the plot holes, but the inventive action sequences come fairly quickly so you don't have to think too hard about it. The partnership of the on the edge Steve and the terse Bishop could have been a better movie and the resolution came too quickly, but it was quite satisfying at the end. It's a good mindless diversion for January.
(Review by reesa)

Posted by Dallas Movie Screenings at 2:35 AM

Email ThisBlogThis!Share to TwitterShare to FacebookShare to Pinterest
Labels: The Mechanic review