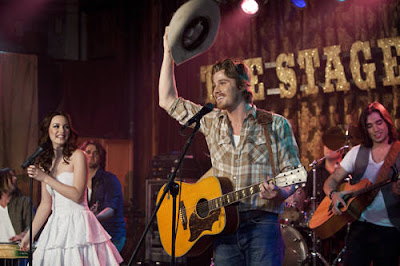 Kelly Canter is a big named country star at a rehab center after a disaster during a Dallas concert where she drunkenly fell off the stage while she was pregnant losing the baby. Her husband and manager James wants to get her out and back on the road despite the protests of Beau, who works at the center as an orderly who says she's just not ready. Writer/director Shana Feste who did The Greatest has created another schmaltzy melodrama with a star cast only this time with music.

Beau Hutton (Garrett Hedlund of Tron Legacy) is a country singer/songwriter who has been having a really close personal relationship with Kelly (Gwyneth Paltrow) while she was recovering. They spend lazy afternoons writing songs together among other things. Kelly seems relaxed and happy until her husband James (Tim McGraw) comes in and wants her to leave a month earlier than scheduled as they have shows to do. As her manager, he is stressing a jump star of her career after the scandal in Dallas. Kelly agrees only if Beau is allowed to be her opening act. James has other ideas, he's checking out a new young female singer Chiles Stanton (Leighton Meister of Gossip Girl) an ex Miss Dallas and as Beau calls her a country Barbie. She's written some pop country songs but has a tendency to freeze on stage. Beau is also playing the showcase where Chiles is the closing act as an audition for James. When she as expected freezes, Beau comes to her rescue by doing a duet with her so she can continue her set. James decides to bring them both on tour asking Beau to keep an eye on Kelly as her protector.

In this typical story of money and fame cannot buy you happiness, Kelly has seemed to have lost along the way the joy of her music and the love of her husband. Her own infidelity with Beau leads her to suspect that James is flirting with Chiles who idolizes Kelly (and Jesus Christ in the same breath). But she also sees in Chiles what she was like starting out in the business. The hunger for success with a raw natural talent. The pressure of the tour is also too much for her to process when something sets her off and she starts drinking again. Her efforts to rekindle her relationship with James is met with reluctance so she falls back to Beau. Beau honestly doesn't think that he's helping her situation, plus he's started to get close to Chiles. Chiles wants the fame, Beau wants to just play at a bar and work on his tunes, Kelly wants to go back to where she started, James just wants the success to continue. Will this ever get resolved?

If you love soaps, you will love the starry eyed love, the tragic star (Paltrow looking her age), the long suffering husband, and the back stage look at what it's like to be famous. Tim McGraw looking all tan, healthy and well taken care of, does pretty well here not knowing what to do to bring back the wife he once loved. The movie is really about the young lovers. Despite the trailer, Paltrow doesn't really perform that many songs, but wears really short dresses and flaunts around on the edge wrestling with her demons that are not fully explored. Meister and Hedlund are just cute as buttons, Meister shiny, Hedlund looking raggedy in a scruffy beard that looks glued on. This movie does not require a lot from it's audience. There are some nice tunes, even if you are not a big fan of the genre, mostly because it's sung by non “country” actors. Entertaining when the music is flowing, otherwise Country Strong comes off more like country yawns.
(Review by reesa)