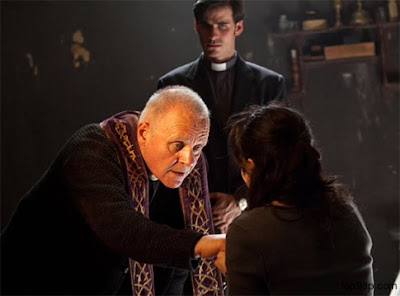 Michael Kovak works in his family mortuary. He is preparing a young woman who committed suicide. He wonders why she would do such a thing. His father reminds him that they just care for people as they come to them, and not to reason how they got there. But restless Michael is seeking more answers so he enrolls in seminary school to become a priest. Before he takes his final vows he questions his commitment and wants to drop out. As one of his teachers rushes to speak to him it sets off a series of accidents that Michael forces to perform last rites on a victim despite his lack of faith.

Based on the book The Rite: The Making of a Modern Exocist by Matt Baglio who wrote the script with Michael Petroni. Directed by Mikael Håfström it tells the story of the disillusioned young man who is sent by kindly priest (Toby Jones) to Italy to learn how to carry out exorcisms. Pope John Paul II has decreed that a exorcist be available in every Parrish as demonic possession is on the rise. Irish stage actor Colin O'Donoghue is Michael Kovak who gets assigned by Father Xavier (Ciaran Hinds) to work with Father Lucas (Anthony Hopkins) who regularly performs exorcisms. Father Lucas lives in a rundown villa that is over run with cats. He is also a medical doctor and his “patients” come to him like an office call. A young very pregnant girl comes in, shy and unassuming. Michael is having a hard time believing she is possessed and believes she really needs is a good shrink. Father Lucas has Michael pull something out of his pocket and put in a bag. Later while bringing out the demon while praying over the girl he asks her what Michael is holding in his bag. She names it correctly. Michael is still not convinced. No matter what kind of contortions their bodies and voices exhibit, Michael tries to find a rational excuse why this is happening. Father Lucas warns him that “Choosing not to believe in the devil won't protect you from him.”

The Rite fortunately doesn't pull out the usual exorcism tricks and symbols. It's not so much a horror thriller as it is a more psychological journey as Michael comes to terms with his faith. Hopkins is as usual a fascinating actor, but in some places you can't help notice that he's channeling Hannibal Lecter. The creepiness factor hangs heavy over the tone of the sound, light and color. Hopkins melodious voice almost lulls the viewer into a dream state (meaning you may feel sleepy). O'Donoghue underplays Michael so much that it's hard to tell why he's not reacting to the weirdness happening during the exorcism sessions like most people would. A young Rutger Hauer would have done a better job in the role, but he's relegated to being Michael's father. Alice Braga is Angeline a reporter who is also taking his exorcism class and wants to write about the process gets more than she had expected. If nothing else it's worth it just to see the red eyed mule.
(Review by reesa)

Posted by Dallas Movie Screenings at 2:41 AM

Email ThisBlogThis!Share to TwitterShare to FacebookShare to Pinterest
Labels: The Rite review