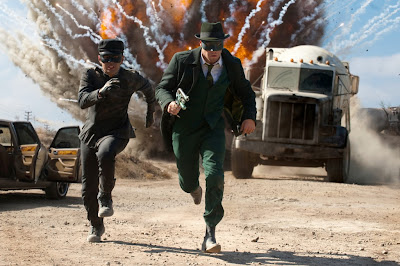 James Reid is a wealthy newspaper publisher who doesn't have time to be good father to his young son Britt when the child gets in trouble for trying to stop a fight in school. James doesn't have the patience as he has an important job running the newspaper and no time to spare for one spoiled little boy. Twenty years later, harboring a little resentment, Britt is an irresponsible playboy who is suddenly thrust into taking over his father's empire after James dies from an allergic bee sting. He also inherits his father's genius car mechanic and excellent coffee barista who has some special hidden talents.

Seth Rogen is the least likely kind of actor one would think to play a comic book hero but he does fit the philandering egocentric rich kid. Kato (Jay Chou) is obviously the wiser and more competent of the two relates to Britt's loss and the young men bond quickly. One night while carousing in one of Kato's hopped up vehicles, they encounter a walking couple attached by thugs. Without a lot of thought to the uneven match of power, Britt tries to face down the rabble and ends up almost getting shot before Kato swoops in with his cool martial arts skills to take them all out. Fired up by adrenalin the team decide to become masked vigilantes and help bring bad guys to justice. Kato creates the coolest car ever, Black Beauty, a modified 60's Chrysler Imperial that can repel bullets, fix flats, with plenty of guns and wheel spikes. Their efforts to fight crime brings down the wrath of Benjamin Chudnofsky (Christoph Waltz) a paranoid Russian gangster who later wants to be called Bloodnofsky to make himself more colorful.

Rogen maintains that everyman likability but his character is almost too grating. There are times when the shtick gets to be too much, and you just want the hero to finally find it's mark and stop being such a jerk. Asian popstar Chou is almost too stoic with his struggles with English loses the rhythm of the scenes. His “Kato-Vision” and fighting sequences were some of the best parts beside the car. He even gets to show off his musical pipes. Kato and Britt have some fun and fight over Britt's secretary Lenore (Cameron Diaz). It's nice to see Diaz, but really anyone could have served in this part. Edward James Olmos is also wasted as Mike Axford the newspaper editor who tries to guide the useless Britt on his new job. Also look for James Franco's cameo in the beginning of the movie for a very amusing confrontation with scene stealer Waltz.

The original Green Hornet started as a radio show in the 1930's, evolving to movie and television series and comic books. For the big screen treatment was suggested back in 1992 with George Clooney. Mark Wahlberg, Jake Gyllenhall and Nicolas Cage were all attached to it a various times. Eventually in 2007 Seth Rogen was hired as the lead as well as co-write the script with frequent collaborator Evan Goldberg. In 2008 Stephen Chow was set to direct and co-star as Kato. When he dropped out Michael Condroy who had done Eternal Sunshine of the Spotless Mind was brought in and Taiwanese singer Jay Chou was brought in as Kato. Despite all the hands in the pot, the final product was surprisingly entertaining and worth a large popcorn and soda.
(Review by reesa)

Email ThisBlogThis!Share to TwitterShare to FacebookShare to Pinterest
Labels: The Green Hornet review