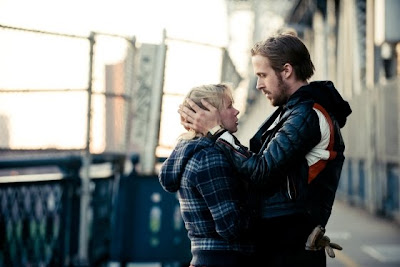 Dean is a jack of all trades. He talks himself into a furniture moving job without any experience. During one of these moves to a nursing home he sees a young woman, Cindy, visiting her grandmother and he feels an immediate attraction. He semi stalks her and they meet cute. Writer/director Derek Cianfrance with screenwriters Joey Curtis and Cami Delavigne explore the beginning, middle and ending of romance and marriage by hopping from past and present in the turbulent relationship of Cindy and Dean.

Ryan Gosling and Michelle Williams both listed as executive producers on this project give a very raw and powerful performance depicting young and stupid in love. Hormone heavy, awkward, love is blind, then suddenly pregnant and reality rears it's ugly head. Cindy's dreams of going to med school instead ends up working as a medical technician while Dean has advanced to odd job construction work. Devoted to their small daughter, it's still a struggle to make ends meet, and the youth that should have been spent in exploration and experimentation is battered down by the daily grind of survival. Dean the more loose and easy going, a child man not tuned to any particular ambition, doesn't quite understand the frustration that is slowly building in Cindy. Anyone who has ever felt trapped in a relationship will easily relate to her growing depression. Some six years later Cindy is walking like a zombie, can't find the attraction to her husband, and just plain sorrowful most of the time. Cindy already had to deal with an abusive father in her early life and she may or may not realize that she is becoming like him. When the blush of first love fades away then all the good things she thought about Dean like his happy go lucky nature becomes a bigger annoyance. Communication becomes almost non existent as they battle in fights that you may have had yourself breaking up with someone. It will make you squirm to hear everyone yelling and no one is really getting to the point. The romantic getaway scene where Dean tries to rekindle their romance goes all awry and is the most uncomfortable to watch. Nothing short of intense couples therapy can help these young folks.

This isn't the typical Hollywood romance movie. Most of the scenes have a feeling of improvisation so what they are saying seems very real and organic. This is more like a reality show filmed in your living room type of story. There are no happy ending walking hand in hand in the sunset. It's hard to be entertained by the harsh light cast on real married life. The hopping back, forth and between the progress of their lives can be disconcerting. How Dean loses so much hair in just six years is kinda weird too. The controversy of the possible NC-17 rating was way overblown. There are some scenes that could be considered explicit but there's been worst in other movies. Probably not a great film to bring your significant other, but worth just watching as Gosling and Williams eat up the screen.
(Review by reesa)