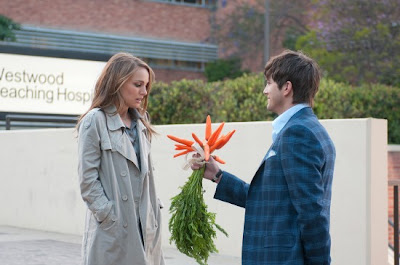 Adam and Emma meet at a junior high aged summer camp where they both decide they are weird and oddly compatible. Years later they meet at a frat party in Michigan where once again they feeling simpatico and Emma invites him to this “thing” which turns out to be her father's funeral. Still more years later they run into each other in LA where she is now a medical resident and he's a television production assistant hoping to be a writer. It's mostly Emma's idea to have a friends with benefits relationship, and hound dog Adam is willing to agree to anything just for the free sex.

Adam just found out that his former TV actor and pot smoking father played by Kevin Kline is currently dating his former girlfriend. Freaked out he attempts to call all the women on his cell phone to see if one will sleep with him. His two best friends, Wallace (Chris “Ludacris” Bridges) and Eli (Jake Johnson) are both encouraging and repelled by his dilemma while Adam drinks himself into a stupor. Later he wakes up naked on a couch in a strange apartment wondering if he's had sex with anyone who lives there. It turns out to be Emma's place with her fellow med student roomies. When Emma fills him in with tales of his naked dancing, they quickly give in to their years of attraction. Emma wants them to keep it a secret and just keep it about sex. No fights, no jealousy, no commitments, no cuddling, just sex anytime, anywhere. Like most guys this is a dream come true. But as time goes on, Adam realizes there's something more there. As Adam gets closer, Emma pulls away.

Director Ivan Reitman and writer Elizabeth Meriwether have created a clever little rom-com that Love and Other Drugs should have been. Not weighted down by terminal diseases, sexual performance meds, and nudity, No Strings Attached is more silly and off beat. There seems to be a trend in free love movies with the upcoming Friends With Benefits. Look for a good supporting cast from Greta Gerwig, Lake Bell, Olivia Thirlby and Minday Kaling. The language can be a bit raunchy, but listening to my own 20 something kids, it's pretty much how they speak. Ashton Kutcher is supposed to be in his late 20's perhaps looking too long in the tooth is the warm hearted goofy womanizer and pretty much the same in every role he's done. Natalie Portman is still waif thin but looking more healthy than in Black Swan is a little bit hard to believe as a doctor. No reason is given for Emma's relationship phobia or how Adam manages to be a decent human being with having a Hollyweird upbringing. But the two do have a little chemistry and that with the strong supporting characters makes this film work for a nice way to break in January.
(Review by reesa)

Posted by Dallas Movie Screenings at 9:50 AM

Email ThisBlogThis!Share to TwitterShare to FacebookShare to Pinterest
Labels: No Strings Attached review