Ip Man 2: The Legend of the Grand Master 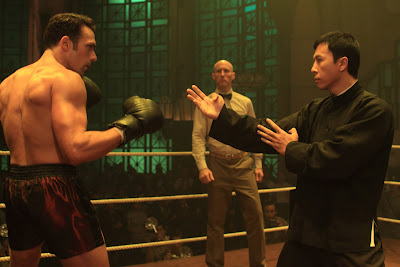 The sequel to the story of Wing Chun martial arts master Ip Man reunites director Wilson Yip, screenwriter Edmond Wong and star Donnie Yen. It covers Ip Man's move to Hong Kong in 1948 where they fled after the Japanese-Sino War. Now safe and recovered from his gun shot wound Ip Man with his pregnant wife and his son can barely pay the rent. Ip Man seems perfectly happy just to sit smoking his cigarettes and drinking tea. His attempt to open a martial arts school is met with resistant from the other schools in the area who have “rules”. It means that he must demonstrate his abilities with the other masters and pay a protection fee which is a kickback to a crooked British police officer.

Ip Man attends the competition easily defeating the masters of Monkey Kung Fu
and Baguazhang (circle walking)
but refuses to pay the fees. This makes his school prey from the bullies of the other schools who harass Ip Man's students. They get kicked out of their rooftop space but Ip Man refuses to stop teaching. He confronts Master Hung Chun-nam (Sammo Hung Kam-Bo) who wants to finish their fight which ended in a draw, but when his family interrupts they depart with a grudging respect for one another. He gifts Ip Man with tickets to see a western boxing match put on by the British colonial rulers. They have brought in a champion Austrailian fighter Taylor "Twister" Milos
(Darren Shahlave) who uses his skills on the Chinese kung fu style demonstrators and taunts the Chinese into a brawl. Ip Man and Hung Chun-nam step in are able to stop the fight and demand an apology. Twister demands that if the Chinese want an apology he will give it to them if they can defeat him. Hung takes on the fight so the "white devils” cannot take away the pride of the Chinese martial arts. Despite the Hungs' skill he is older and gets winded. He refuses to give up even after Ip Man begs him to stop. The younger man defeats him, beating him to death in the ring. The Chinese newspapers declare that the western fighter bullied the Chinese. The bad British cop arrests the editor and break his hands so that he can't write. The British put their own spin on the events and decide to stage another fight. Ip Man decides to face the challenge in honor of Hung and the Chinese culture.

The climatic fight with the boxer is similar to the ending fight in the first Ip Man against the Japanese Karate master. Once more Ip Man resurrects the national pride of the Chinese people. After the fight Ip Man says he was fighting for the dignity of all people and that they should respect each other. The epilogue introduces Ip Man's most famous student Bruce Lee who started training with him at the age of 16.

The legendary Sammo Hung is back as fight choreographer and shot his own fight scenes while recuperating from heart surgery. The master's match on a rickety table top surrounded by upturned chairs was perfectly staged. The boxing matches as well as the street brawls made for more of an action packed follow-up. As in the first movie, Donnie Yen is amazing as the deceptively calm master who advices his students that's it's better not to fight. His emphasis to his students is on Chinese wisdom and philosophy. You don't really need to see the first movie to appreciate this one, although you would be wise to experience both as companion pieces.
(Review by reesa)

Posted by Dallas Movie Screenings at 2:53 AM

Email ThisBlogThis!Share to TwitterShare to FacebookShare to Pinterest
Labels: Ip Man 2: The Legend of the Grand Master review