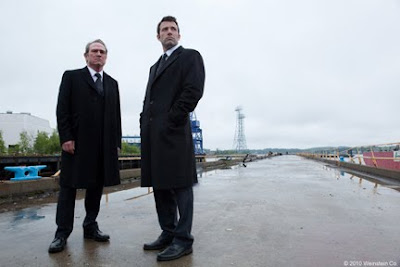 Anyone who is receiving extended unemployment benefits will find this film hitting close to home. Last year's “Up In The Air” centered on the people doing the downsizing. “The Company Men” focus is on the people who lost their jobs. Director/writer John Wells pulls good solid performances from his cast while he tells the story of middle management workers suddenly losing their long time positions and what happens to them.

GTX a Boston conglomerate that grew out of a ship building company started by James Salinger (Crag T. Nelson) and his college roommate Gene McClary (Tommy Lee Jones) must lay off hundreds of employees to please it's shareholders. One of the first to go is Bobby Walker (Ben Affleck) a sales executive who has been living the plush suburban life with his wife Maggie (Rosemarie DeWitt) and their two teenaged children. Gene, his mentor is no where to be found so he takes his anger out on Sally Wilcox (Maria Bello) the corporate hench-person who must deliver the news to the staff. One by one people pack their personal belongings and tearfully leave the building. Bobby goes to the employment agency hired by GTX to help transition the laid off staff to find other work. The job coach make the already dejected ex-workers engage in confidence building exercises that Bobby finds false and unhelpful. The office is filled with other people using the office resources to make phone calls and copy resumes. Some have been there for months and find it amusing to see Bobby still dressed like going to the office in his suit and “can do” attitude. All this quickly fades as the reality of the small severance and unemployment benefits means that the comfortable lifestyle they once afforded must now be whittled down to the point where they end up living with Bobby's parents. Bobby takes a job with Maggie's brother Jack Dolan (Kevin Costner killing a bad Boston accent) renovating a house during the winter. Jack and Bobby have never been friends, but he helps out the clueless and hardworking Bobby anyway by slipping him extra pay although he can't afford it.

Gene McClary unhappy with Salinger's decision to cut jobs while raising their bonuses has to honor him at a dinner. The next thing he knows he's given the pink slip by his lover Sally. Phil Woodward (Chris Cooper) started at GTX 30 years before as a ship welder. Worked his way up the ranks. His daughter is contemplating which Ivy League school to attend when he also gets the ax. Now, almost 60 years old he has to compete in the already stressed job market getting turned down because of his age. There once was a time a person can devote their lives to their jobs and enjoy the benefits that long time steady employment affords. Instead the bottom line and corporate greed has pulled the rug out and no one is safe. Despite the gloom and doom of the subject especially if one is experiencing it now, there is a light of hope at the end. Too bad we all can't have that ending in real life.
(Review by reesa)

Email ThisBlogThis!Share to TwitterShare to FacebookShare to Pinterest
Labels: The Company Men review