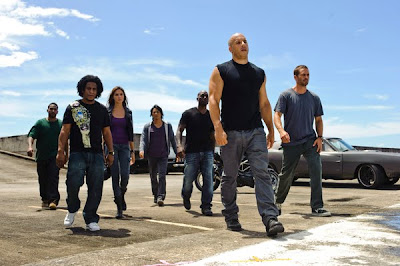 The boys are back in town for the 5th episode of fast cars and testosterone with a little bit of Godzilla vs. King Kong. Vin Diesel and Dwayne Johnson go toe to toe in a beefy battle that is one highlight of this blatantly mindless action flick that full of guns, cars and terse dialogue. You don't really have to have had seen the last 4 of the franchise, but this turbo charged chapter is probably the best of the bunch.

The action is set shortly after the fourth movie when Dom (Vin Diesel) and Brian (Paul Walker) are supposed to meet up in Rio. Dom's old friend Vince (Matt Schulze) gets them involved in a heist of some cars on a train, but it goes badly and the guys are set up to take the blame for the deaths of some DEA agents on board. Agent Hobbs (Dwayne Johnson), the relentless bounty hunter for the feds is sent in with his team to catch them. Meanwhile Rio gangster leader Reyes (Joaquim de Almeida) is also looking for them for the chip that was inside one of the stolen cars. It involves a GPS delivery schedule for shipments of dealer packs each worth 10 million dollars. The Ocean 11 heist requires the guys to assemble their old team that includes a chameleon, a fast talker, a techno, wall puncher, utility and weapons and a 2 person driving team.

Don't think it's all guy action, the cast includes some capable women with the absence of Michelle Rodriquez in this installment. Jordana Brewster as Dom's sister and Brian's girlfriend is back. They have also added former Miss Israel Gal Godot as the cool collected Gisele and Elsa Pataky as the rookie cop Elena recruited by Hobbs. The merry band is rounded out by the welcome return of Tyrese Gibson, Ludacris and Sung Kang . Everyone has some fun stuff to do so the action seems well balanced.

Director Justin Lin is back for his third outing at the helm working with a script by Chris Morgan that is filled with the most outrageous stunts. Prison break, gun battles across Rio's favela shanty towns, running a car into a moving train, and dragging a huge safe through the streets of Rio pulled by two Dodge Chargers are the biggest octane fueled moments to be expected. Don't come expecting a story. Just sit back, fasten your seatbelt and enjoy the ride. And wait until after the credits for that extra scene which is probably the set up for Fast 6.
(Review by reesa)

Posted by Dallas Movie Screenings at 11:51 AM