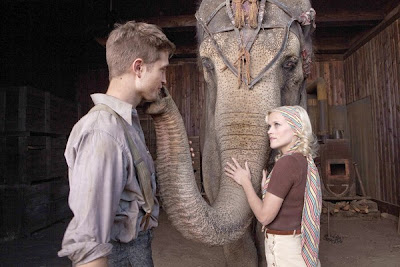 An old man is too late for the circus performance and the workers there think he's escaped from his nursing home. The gentleman spots a picture of the old Belzini Circus and becomes deep in thought. Curious the circus manager wants to hear the story of what happened back in those ill fated days of 1931.

Hal Hobrook plays Jacob as an old man relaying the story of when he was taking his last exam of veterinary medicine at Cornell when a tragedy befell him. Losing his parents and unable to finish school the young Jacob (Robert Pattinson) is just another homeless person on the road on his way to the city during the depression . He decides to jump a passing train which turns out to be a box car for the Belzini Brothers Most Spectacular show on Earth. The roustabouts put him to work shoveling manure. There's a certain hierarchy in the circus family with the head being the sole leader and arbitrator. Belzini is run by the charismatic mentally unstable August (Christoph Waltz) who is married to the star of the show the beautiful Marlena (Reese Witherspoon). Jacob is able to gain August's respect by diagnosing Marlena's show horses. Embraced as an intellectual equal by August, Jacob is repelled by his manic mean streak. Marlena and Jacob are also feeling a mutual attraction that August doesn't fail to notice.

Adapted from the novel by Sara Gruen by screenwriter Richard LaGravenese and director Francis Lawrence who has done scifi films like I Am Legend and Constantine. This is like an old school movie with the beautifully realized production values of the set design and the rich warm cinematography. There's a moment when Jacob first sees the circus with a childlike innocence and wonder, the acts all bright and shiny before the reality of daily work shows the underbelly of life in those tough times. All the colorful circus characters are nicely portrayed without being stereotypical. There's probably going to be a lot of criticism for Pattinson but he actually does a creditable job. His bedroom eyes will certainly be exciting for Team Edward fans, but you have to give the guy some props for the effort and to the director who doesn't play it up. It's also nice to see Witherspoon in something meaty again. She's has a Garboresque glamor with her bleached blond curls and bright red lips taming the wild beast that simmers in her husband. Waltz does his best work since Inglorious Basterds as the mercurial August who is sympathetic and in desperate need of bi-polar meds. His circus family lives in fear of his wrath and his benevolence. Throwing someone off the train is an extreme form of getting outsourced. It's the elephant Rosie who steals the show. It's more like a love triangle between Jacob, Marlena and Rosie. If you want a good old fashioned movie romance, then this is it.
(Review by reesa)

Email ThisBlogThis!Share to TwitterShare to FacebookShare to Pinterest
Labels: Water for Elephants review