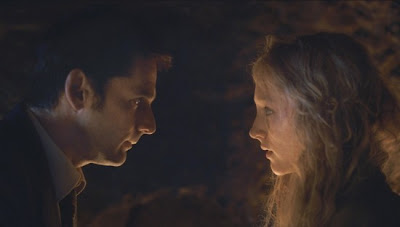 Hanna lives in the snow covered arctic wilderness with her father who has intensely teaching her how to survive physical and environmental adversity. Her skills are strong enough that she can even defeat him. She says she's ready. He shows her a switch on a tracker and leaves it up to her to trigger it. He tells her once she does there's no turning back.

Saoirse Ronan with those clear blue eyes and shock of blond hair plays the cool collected and deadly Hanna. Raised in seclusion with only her father Eric (Eric Bana) as parent, teacher, and fight master, Hanna hasn't even heard music. Once Hanna turns on the tracker, Eric puts on a suit and takes off. Hanna has been rehearsing her personal back story to give to people who ask her, she also has memorized what she is to do once she is “rescued”. Marissa Wiegler has been in charge since Hanna's birth with finding Eric a one time agent who is now considered a rogue and dangerous. They take Hanna to some underground bunker where they attempt to question her. Hanna tells them she wants to see Marissa, and they send in a stand in which Hanna quickly dispatches and escapes her captors. They had taken her to Morocco where she falls in with a family traveling in a van. Hanna so expertly trained in most everything as no experience with anything electric, large groups of people, how a family interacts with a mom, dad and siblings or even being kissed. But her main goal it to get to the predetermined location to meet up with her father with ruthless operative Marissa hot on her trail.

Joe Wright who also directed Saoirse in Atonement works with a story and screenplay by Seth Lochhead and David Farr that deals with a long abandoned plan to breed super soldiers. Hanna only has a picture of her mother who was recruited and died while escaping the program. Cate Blanchett purrs with an over done southern accent while ordering lethal force in tracking down Eric and his daughter. The conflict of Hanna meeting the real world is nicely played out through Saoirse beautiful eyes. She is able to relay the cold blooded stare of an assassin or fascination with a light bulb and soften to accept the friendship of another young woman her own age. The Chemical Brothers soundtrack keeps the pace pulsating during the action sequences that include lots of hand to hand fighting and running. Lots and lots of running. A little bit of Bourne, Salt, and Bauer. Hanna is engaging, entertaining, over the top and kind of a weird role model for young women.
(Review by reesa)

Posted by Dallas Movie Screenings at 2:52 AM