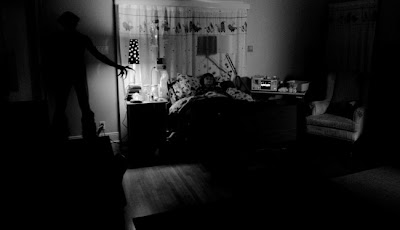 If the title of the movie doesn't tell you it's supposed to be a scary movie, then the screeching violins and the weird smiling white faced woman in the candlelit window may be a clue. Renai and Josh Lambert are moving into wood trimmed arts and crafts bungalow with their three children. Josh is a teacher and his wife stays home to care for the littlest one still in a crib. When middle son Dalton tells his mom that he wants to switch rooms, you gotta wonder why.

Little noises in the attic and fallen books doesn't necessarily raise red flags to Renai (Rose Byrne). But when voices are heard coming over the baby monitor is followed by Dalton falling into an unexplained coma, then she starts getting edgy. Husband Josh (Patrick Wilson) is beginning to spend more time at school “grading tests” and not being a huge help. Especially when the front door keeps opening even after he locks it and sets the alarm. Renai understandably freaked wants to move out of house when blood stained pointy hand prints appears on Dalton's bed sheets. But whatever is haunting this family follows them to the new house. Josh's mom Lorraine (Barbara Hershey) recommends her friend Elise Rainer (Lin Shaye) who is saddled with the exposition of what's going on. Her team of goofy ghost hunters Specs and Tucker (Leigh Whannell and Angus Sampson) with their electronic gadgets break the dreary mood with some welcome comedy. What they find involves astral projection and traveling spirits a device that's not normally found when things go bump in the night.

Recent attempts at scary ghost stories like the Paranormal Activity films only make my teeth grind in frustration. Or have fits of laughter at the ridiculous situations that stretch the patience. So one wonders what Saw's director James Wan and Saw writer Leigh Whannell can do without indulging in gore porn. The slice and dice overkill are thankfully missing in this film. There's a little bit of homage to every ghost movie made in this but it will mostly remind one of Poltergeist. The acting is good, Byrne and Wilson make a handsome pair and the kids are cute as buttons. The special effects don't go overboard and are almost too minimal. The creepiness factor could have been amped up a bit but respect the filmmakers restraint of just making you jump for the heck of it. And if you don't know if you are supposed to be scared those violins like nails on a chalk board will remind you.
(Review by reesa)

Posted by Dallas Movie Screenings at 2:36 AM