Hoodwinked Too: Hood vs. Evil 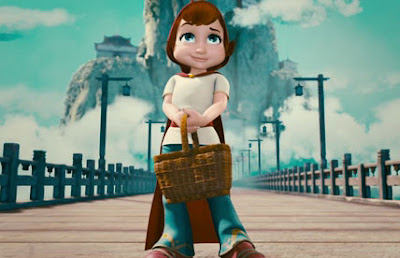 Hansel and Gretel have been kidnapped!!! The “Happily Ever After Agency”, aka HEA has been called in to find the culprit. Red Riding Hood, The Big Bad Wolf, Granny Puckett, Twitchy and Nicky Flippers are all back on the case.

Red (now voiced by Hayden Panettiere) has gone for training with the Sisters of the Hood. They are in seculded mountain hideaway that teaches not only do martial arts but baking. In fact the final level you can achieve is the ability to name the secret ingredient in the special truffle. A truffle that has the ability to make a person invincible. Not many acolytes have ever reached that level. Red's training is cut short when she is summoned by the dapper frog Nicky Flippers (David Ogden Stiers ) the head of the super secret Happily Ever After Agency. The wicked witch (Joan Cusack) is holding the Hansel (Bill Hader) and Gretel (Amy Poehler) in a gingerbread house in the forest. The Wolf (Patrick Warburton), Twitchy the hyperactive squirrel (Cory Edwards) and Granny (Glenn Close) need the whole team on the case. They check out information that leads them to the Beanstock Club run by mob boss Giant (Brad Garrett). They need to question the singing harp (Wayne Newton). There's also run ins with Boingo the Bunny (Andy Dick), Moss the Troll (David Alan Grier), Mad Hog (Cheech Marin), Stone (Tommy Chong), Heidi (Heidi Klum) and Kirk the Woodsman (Martin Short). All this to find the kids and uncover a plot to steal the secret truffle recipe.

Director Mike Disa also wrote the script with Cory and Todd Edward and Tony Leech. The animation is typical and colorful but nothing special. The 3d elements were added in post production so it's really not worth spending the extra cash on those glasses. The story which is often muddled maybe too complicated for younger kids. The dialogue is filled with pop culture references like Rachel Ray, the Food Network, Twitter, and Silence of the Lambs. There's even a funny bit when the HEA agents store the gingerbread house by eating their way in. The first Hoodwinked came out in 2005 with the voice of Red in that movie was done by Anne Hathaway, and one would be hard pressed to remember it. The fairy tale mash up has it's punny moments but it's only there for the parents who are forced to take their kids to the movies.
(Review by reesa)

Email ThisBlogThis!Share to TwitterShare to FacebookShare to Pinterest
Labels: Hoodwinked Too: Hood vs. Evil review