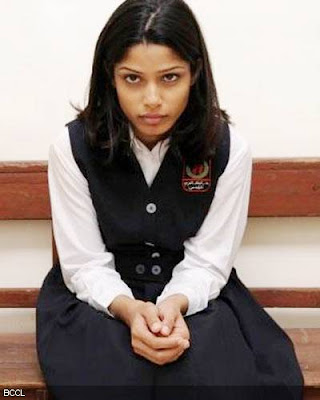 n 1948 Hind Husseini rescues some orphan children when they are displaced by an attack on their village. Through the various upheavals in the political climate of Jerusalem during the establishment of the state of Israel the children's home has gone from 55 to 2000 at the Dar Al-Tifel Institute.

Director Juilian Schnabel has adapted the autobiographical novel by Rual Jebreal tells the story of four women with a Palestinian point of view. It begins with Hind (Hiam Abbass) then we meet Nadia (Yasmine Elasri) who is sexually abused by her mother's husband runs away from home and become a belly dancer. When someone on a bus calls her an Arab whore she punches her out and gets set to prison. There she meets her cellmate Fatima (Ruba Blal) who was given three life sentences for setting a bomb in a theater that didn't go off. When Nadia gets out Fatima sends her to a friend when she meets Jamal who is a friend of Hind. He marries Nadia and they have Miral. Nadia keeps drinking and eventually kills herself. Jamal takes Miral (Frieda Pinto) to live part time at the children's home. As a teenager she goes with the other students to teach in the refugee camps where she witness someone's home being torn down by the Israelis. This incident seems to be the catalyst for her to join a protest march. When her friend dies during the demonstration she begins a romance with a PLO member Hani (Omar Metwally). Her father tries to get her to stop, but her teenage mind is adamant in her beliefs.

Life in the middle east during the 1967's Six Day War and the 1987 intifada is filmed effectively with the parched landscape of Jerusalem. The dry uninviting environment is countered by lives of it's inhabitants. Viewers will not be educated on the history of those turbulent time as the story is told from the character's point of view. Miral's change from obedient student to radical sympathizer is rushed through. Frieda Pinto photographs beautifully and her portrayal is heartfelt but the more remarkable story is that of Hind and what she accomplished in helping to educate the thousands of children with patience and love.

After the film's April release Juliano Merr-Khamis who plays Seikh Saabah in the film was shot to death outside the theater he established in a Palestinian refugee camp. Merr Khamis was a well known director and activist.
(Review by reesa)

Posted by Dallas Movie Screenings at 2:41 AM