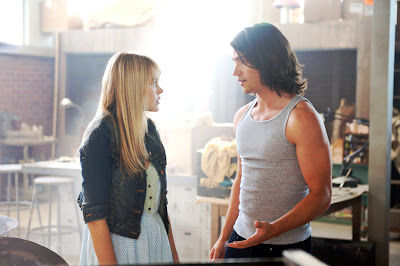 At Brookside High School it's three weeks before Prom. Student class president Nova Prescott is in charge of organizing the event. She and her committee has just put the last touches on the decorations. Now the only thing left is to find a date. Asking and getting asked to the prom seems to be a major turning point in the teenage life cycle. Or as one student says it's “the soul crushing mistress”.

Nova (Aimee Teegarden of Friday Night Lights) is the all around over achiever. She's just been accepted at Georgetown but all these extracurricular activities hasn't made her into a snob. She has good friends, but no particular guy. She's hoping that Brandon (Jonathan Keltz) who just got accepted to Yale will ask her to the prom. He is dad approved material for his daughter. All around her guys are pulling all the stops to ask out their dates. The much anticipated request doesn't go as she hoped. On top of that, the shed with all the prom decoration is accidentally burned to the ground. Her committee doesn't want to do it all over again.

The principal assigns the school bad boy Jesse (Thomas McDonell who elicited lots of swoons from the young women in attendance) to the task or else he can't graduate. Immediate animosity develops between the two, but as they work together they begin to see each other in a different light. Jesse's mother a single mom works as a waitress and he helps care for his little brother. He's also got some anger issues with his dad who left them. Nova is just the opposite with her supportive and if somewhat over protective father who sees Jesse as a threat and distraction to Nova's future.

Director Joe Nussbaum and writer Katie Wech tell a coming of age story in the typical Disney fashion in a high school populated with nice looking teens who cover the ethnic spectrum. There's the African-American football player and his girlfriend who are a shoe-in for the prom King and Queen. There's one Asian and a couple of Hispanics. Mostly the students are white in a suburban neighborhood. The usual high school hierarchy is also represented with the jocks, nerds, and preps. Each of these archetypes featured include the tall dorky guy who can't get a prom date, a couple of sophomores who face bro-friend troubles when one of them favors a pretty girl, and Nova's girlfriends who are her biggest fans . There is lots of meaningful conversations on the importance of getting a prom invite. No metal detectors or armed guards in sight. No one is particularly mean and no slushies are thrown in someone's face. There's no gay issues here. No sex. No drugs. No drinking This is Disney after all. The little side stories are about not being judgmental and how the memories you have in high school will stay with you for the rest of your life. Good for teens going to their first prom.
(Review by reesa)

Posted by Dallas Movie Screenings at 12:29 AM