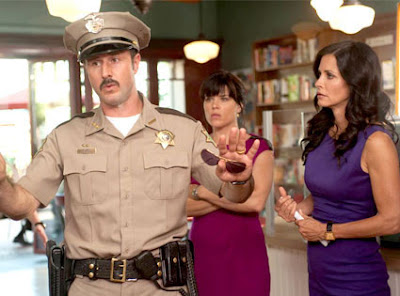 Anna Paquin, Kristen Bell and Heather Graham are victims of a gruesome slaughter in a movie called Stab 7 being watched at home by some teen girls who get slaughtered themselves by an intruder who calls first asking “what's your favorite scary movie?” So begins the reboot of the successful if somewhat unsatisfying Scream trilogy. Screenwriter Kevin Williamson and Director Wes Craven have wisely returned to the form of the first and best of the Screams.

Sidney Prescott (Neve Campbell) has returned to Westboro after writing a self help book called Out of Darkness. It deals with the aftermath of being the only one left alive after the Screams 1,2 and 3. Word of the murdered teens gets everyone riled as it happened on the anniversary of the first murders in Westboro. Gale (Courtney Cox) wants to help solve the crimes like she did before with her now husband Dewey (David Arquette) who is now the sheriff. Sidney is staying with her aunt Kate (Mary McDonnell) and her cousin Jill (Emma Robert). Jill just broke up with boyfriend Trevor (Nico Tortorella). She gets one of those Ghostface calls as well as her next door neighbor Olivia (Marielle Jaffe). Kirby (Hayden Panettiere) their horror buff friend and the teen gore movie club nerds Charlie (Rory Culkin) and Robbie (Erik Knudsen) round out the group. Ghostface makes quick work around town as the body count grows. Gail who had written several books about the Ghostface murder sprees decides to try and trap him by hitting the beer filled “Stab-a-thon”, the Stab movie marathon. Fun movie note: the first Stab movie is being shown by Robert Rodriguez.

The best part of the first Scream was the self aware humor and deconstruction of the genre. Scream 4 stays true to form and is even more aware and technically savvy. As usual everyone in the film is a potential suspect and/or victim. Frustratingly is that although they are all schooled on the rules of horror movie mistakes, the teens still do the things you are not supposed to do. It's great to see the older characters back for some action (while trying not to be distracted that Cox and Arquette who had fallen for each other in the first and broke up in this fourth). The film is filled with interesting characters like Marley Shelton, Anthony Anderson and Adam Brody as the deputies and Alison Brie as Sidney's abrasive book agent. The story seems to rely on your previous knowledge of what happened in the earlier films. Not a whole lot of character development before people start dropping like flies. So when the surprise ending occurs, you may be scratching your head saying “really?...huh”.
(Review by reesa)