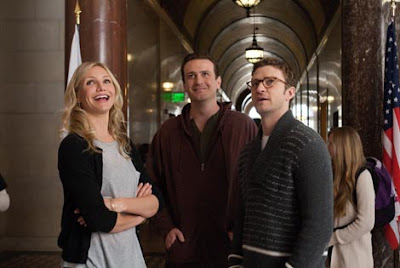 Junior high school teacher Elizabeth Halsey has been skating through her classes with the least amount of effort because now after a year she is leaving to get married. Elizabeth is a sociopath in knock out hot attire and 4 inch heels. She cares nothing for nurturing the kids and is totally unrepentant. She comes home to find her fiancé and his mother have double teamed her to tell her the wedding is off when Elizabeth managed to spend $16,000 of his money in a month. On top of that she forgot it was his birthday. A few months later she is forced to return to the school.

Carmen Diaz plays Elizabeth who can pull the rug over everyone's eyes when she pours on the charm. This is a woman who knows how to use her looks to get what she wants. The principal (John Michael Higgins) collects dolphins figurines and talks from index cards is impressed by Elizabeth's sound bytes. Amy Squirrell (Lucy Punch) is her “hall mate”, as the teacher across from hers is the ultimate educator. She is always winning the prize for the most students who pass the state tests. She's annoyingly peppy to the point where her more savvy students are bemused and confused. On the first day back from the summer, Elizabeth, obviously hungover accepts the condolences of her fellow teachers for her broken engagement. For her class, she puts on a movie every day so she can sleep at her desk. Elizabeth is only concerned with getting enough money to get a boob job and finding a rich man to take care of her. Enter the nebbish Scott Delacorte (Justin Timberlake) a new substitute teacher that catches her eye. He's handsome, nice and his mother is heiress to a watch company fortune. Her radar is firmly fixed to make herself available to him. Only problem is Amy gets along with him really well. They are as Scott sings “simpatico”. The school gym teacher Russe1l Gettis (Jason Segel) is making overtures to Elizabeth with some amusing comments while she shoots him down. He tells her right away that he's going to wear her down.

The comedy directed by Jake Kasdan with a screenplay Lee Eisenberg and Gene Stupnitsky is full of foul language and raunchy subtext. Definitely an “R” rated, leave the kids at home. There seems to be a trend as in Bridesmaid and the Hangover films to say all those things that you can't say on TV or for some people in real life. There are some amusing moments when Elizabeth is wreaking havoc in her single minded attempt at making enough money to pay for her implants. Or when she's paying back pranks on Amy who is bound and determined to get her fired. It's hard to find something appealing about Elizabeth because she is truly a bad teacher without a thought about anyone else. All the other characters are overly ditsy and broadly drawn. The only one with any semblance of reality is the gym teacher. For an afternoon of just mindless comedy and if you like that potty mouth dialogue, then it's for you.
(Review by reesa)