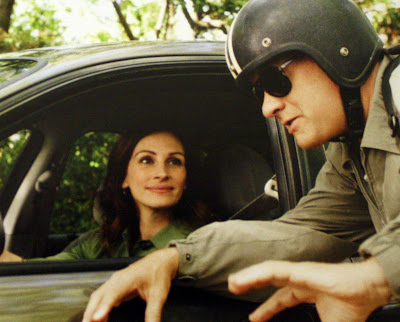 Larry Crowne may have spent 20 years in the Navy, but he's adapted over the years to his job at a super retailer called “Hmart” where he's earned employee of the month at least nine times. Dressed in the uniform of the helpful courteous worker in a red polo shirt and khakis, Larry is happy always doing the best he can. That is why it comes as a shock when corporate policy demands that people are to be promoted but only if they have a college degree. Larry has reached his potential limit at Hmart so he's being down sized.

Like anyone else who's lost their job, there's a period of mourning before you start looking again. Larry (Tom Hanks) is finding that opportunities are scarce in these hard times and has to start liquidating his assets. He buys a scooter to cut down on gas from his garage sale neighbor Lamar (Cedric the Entertainer). He then applies to East Valley Community College where the Dean recommends Speech 217 the art of informal remarks so he can communicate with ease and confidence. His teacher Mercedes Tainot (Julia Roberts) is burnt out on her job and is unhappily married to a blog writer Dean (Bryan Cranston) who spends his days looking at porn. She makes slushy cocktails to numb the pain. Larry's economics professor Dr. Matsutani is a hoot played with a mad chuckle by George Takei. He also starts a friendship with Talia (Gugu Mbatha-Raw) who invites him to join the scooter club and does a redo of his wardrobe. Talia tells him that wearing a polo shirt tucked in says “cop”. One of the scooter friends does his hair and they feng shui his house. Talia gives him his scooter nickname as Lance Corolla. His new attitude and acceptance by his fellow students enliven his life. He may not have gone to college but he's gained a lot of knowledge and experience that helps him tackle his class work load and deal with the new direction his life is taking.

Directed by Tom Hank and written with Nia Vardalos (My Big Fat Greek Wedding) the story is simplistic and charming about someone re-inventing himself and finding love. There's a nice collection of characters in his classroom, at his new job as a line cook, and in his scooter club. We really don't get to know anyone but they all have good intentions and get along with Larry as the binder. Julia Roberts slender and all angles with the remarkable smile tries hard to be the frustrated wife who had enough of her husband. One night after a few too much to drink, she comes on the Larry, who already attracted to her finds it hard to resist. They don't get very far, but the day after she's asking for him to keep it a secret so she doesn't lose her job. The double wattage star power in this little film help sell the premise. It's unfortunate that when one loses their jobs, the future isn't all the rosey. Larry survived nicely, but then his alter ego wrote it that way.
(Review by reesa)