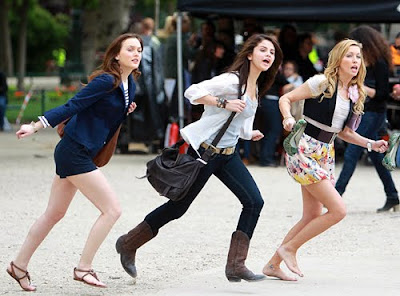 For Texas waitress Grace saving all her tips means a long awaited dream trip to Paris after graduation. She's going with her older best friend Emma whom Grace's mom thinks may be too wild so her new step sister Meg will be reluctantly going with them.

As Meg says it's “the sisterhood of the traveling to France”. Kate Cassidy plays Emma a one time model who didn't graduate who works with Grace (Selena Gomez) at a diner. She's in love with her boyfriend Owen (Glee's Cory Monteith) who is reluctant to commit in their relationship. Leighton Meester pays Meg who just lost her mom 2 years ago, and her dad (Brett Cullen) just married Grace's mom (Andie MacDowell). Sending Meg along will hopefully temper any potential problems that Emma may get them into. Grace's dream of trip is quickly put to the test when the hotel room is dingy and small. The bus tour turns out to be a speed tour and they end up missing the bus at the Eiffel Tower. Frustrated they seek shelter from the rain in a nice hotel where they run into Cordella Winthrop Scott, a snooty spoiled heiress who is skipping out on a special charity event in Monte Carlo. She's the spitting image of Grace and the hotel workers mistake her as Cordella. The girls end up in her room when enticed by a lobster dinner. Soon taking a chance on eating a fancy dinner becomes more complicated when the car to take Cordella to Monte Carlo shows up. Egged on my Emma, they jump on the private plane and are soon wearing Cordella's clothes and jewels partying with the rich and famous. There's lots of pretty clothes and pretty men who are enchanted with young women. Theo (Pierre Boulanger) is surprised to find himself attracted to Cordella whose reputation preceded her. Australian Riley (Luke Bracey) catches Meg's eye in Paris, and runs off with him in Monte Carlo learning how to live and love again. Emma meanwhile meets up with a prince, but finds their stuck up ways don't match up with her home town boyfriend Owen who has come to Paris to look for her. Eventually Grace will have to come to grips of her impersonation when she has to auction off Cordella's expensive necklace at the charity ball.

Selena Gomez with her cupie doll face is breaking away from the Disney fold by taking a more adult role. Gossip Girl Leighton Meester especially shines practically stealing the movie. Directed by Tom Bezucha, it was produced by Nicole Kidman, Denise Di Novi and Alison Greenspan with a story by Tom Bezucha, April Blair and Maria Maggenti. The film was shot in Paris, Monaco, and Budapest like a picture postcard pretty. Selena Gomez and her band The Scene even have one of their songs featured on the soundtrack. The young women and their respective boy toys are attractive and the set ups for the misadventures are most of the time predictable and cute. This one is for the girls and their moms for a summer movie afternoon.
(Review by reesa)