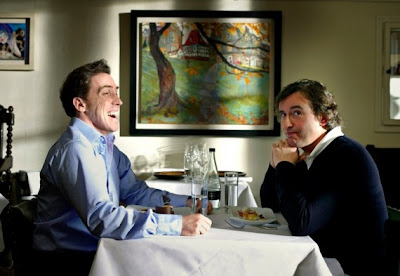 Steve Coogan and Rob Brydon play exaggerated versions of themselves as they undertake a restaurant tour of northern England. It was first broadcast on BBC as a sitcom series in 6 episodes. The total number of minutes for the series was 180, and the film version is cut down to 107 minutes. It was directed by Michael Winterbottom who did A Mighty Heart.

Steve Coogan had just accepted an assignment by The Observer newspaper to do a restaurant tour. He was planning to bring his girlfriend Misha who is a foodie, but she decided to go back to America. He asks his comedian friend Rob to leave his wife for a week. Rob is known for his bit called “Man In The Box” where he throws his voice to sound like someone inside a box. Their “Trip” is filmed with a reality TV sensibility as they drive through the beautiful British countryside of rolling hills and small villages. They check into bed and breakfast sort of inns flirting with the young women. Coogan also indulges in a few one night stands along the way, while Rob waxes romantically about missing his wife's pleasures. The dinners are like 5-star eatery's with the tiny portions that are immaculately prepared. Scallops seems to be a favorite dish that is ordered time and again. Coogan never seems to actually write any comments on the quality of their meals. Instead their dinner conversations turn mostly to try to out do each others impressions of Sean Connery, Michael Caine, Woody Allen, Hugh Grant and Al Pacino in Heat. They do this every time they eat, which could have gotten old quickly, but it's probably the funniest part of the movie. They are both self-depreciative and highly competitive at the same time. The chemistry works well between them with Coogan being the more egotistical of the two. His career has basically stalled but he builds up these movie and TV offers to be more than what they are to his friend. What he thought was his big Hollywood break in Tropic Thunder turned out for his character to be blown up in the first 10 minutes of the movie. The conversations are highly improvised as they are stuck together for a week as they wrestle quips and singing ABBA tunes to keep themselves amused.

Coogan was hilarious in Hamlet 2 a few years ago, but Brydon's is practically unknown in the States. They also played variations of themselves in Winterbottom's 2005 Tristram Shandy: A Cock and Bull Story, which was about Coogan's embarrassing tabloid life. The Trip would have probably worked better in it's TV version like a weekly travelogue restaurant review. The countryside is amazing, the food divine, and the company delightful. As a movie, you just may want to fast forward to the impersonations.
(Review by reesa)

Email ThisBlogThis!Share to TwitterShare to FacebookShare to Pinterest
Labels: The Trip review