Tranformers Dark Side of the Moon 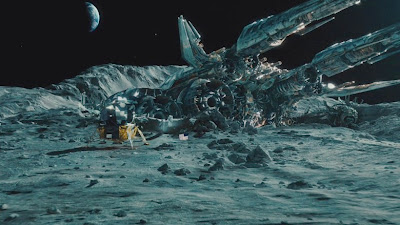 In 1961 earth space scientists track an interstellar object crashing on the dark side of the moon. President Kennedy tells them to check it out before the Russians, except that it's going to take five years for them to be ready to go to space. The first moon landers fake a communications break and Apollo 11 has 21 minutes to investigate the ruined space wreck.

Sam Witwicky (Shia LaBeouf) is now out of college and has a new girlfriend. He's even been awarded a medal by the President for saving the world a couple of times, but he's not allowed to talk about it. Carly Spenser (Victoria Secret model Rosie Huntington-Whiteley) his new love interest is basically supporting him financially and thinks his stories about the Autobots are exaggerated. Sam is frustrated by not being able to pull his weight with his girlfriend and his inability to find a job. It's bad enough that Bumblebee, his car and best autobot friend is out saving the world is working but not him. Even his parents (Kevin Dunn and the hilarious Julie White) who are visiting him in their over sized tour bus are giving him a hard time. He really wants to do something meaningful but the only thing that's offered is a mail room position working for Bruce Brazos (John Malkovich) . Meanwhile Carly is working for rich slick race car driver Dylan Gould (Patrick Dempsey) and Sam is feeling competitive and threatened.

Talking heads are pushing to get rid of the Autobots but fans know this is just misdirections because the Decepitcons are usually up to no good. The buried spaceship on the moon is a NASA cover up that peeves Optimus Prime (Peter Cullen) when he finds out. The Autobots old leader Sentinel Prime (Leonard Nimoy) is hidden inside along with some pillars that held advanced space technology that could have won the war for the Autobots if it had not crashed. Back at Sam's work, Wang (Ken Jeong) is passing him information on the conspiracy on the moon. Sam realizes something may be amiss and brings in Agent Simmons (John Tuturro) to help convince the skeptical new Director of Intelligence (Frances McDormand). Also back is Lt. Colonel Lennox (Josh Duhamel and Epps (Tyrese Gibson). Look for Alan Tudyk in a scene stealing role of Dutch, Simmons accented assistant.

The last Transformers movie was a big huge mess, so this follow up needed to step up the game a few notches to make up for it. Michael Bay returned to focusing more on the human elements of the story and crisis of loyalty for the Autobots. The FX this time around filmed with 3D cameras is easier on the eyes and not as headache inducing. It was nice to see who was fighting who for once and being able to care even for the machines in battle. There are some amazing action sequences that is like an E-ticket ride that's worth the price of the movie with popcorn. This time Chicago is the battleground and the carnage there is pretty intense. Of course there's lots of cheesy Michael Bay shots of patriotic fervor that seems to be his staple but it's getting to the point where one expects some Coke jingle to accompany it. LaBeouf is showing a little better range of emotion instead of being the clueless wiseacre. Not sure if changing the girlfriend worked, the chemistry didn't seem enough for Sam to risk his life to save her. Conclusion: it will rake in the big bucks this summer.
(Review by reesa)

Email ThisBlogThis!Share to TwitterShare to FacebookShare to Pinterest
Labels: Tranformers Dark Side of the Moon review