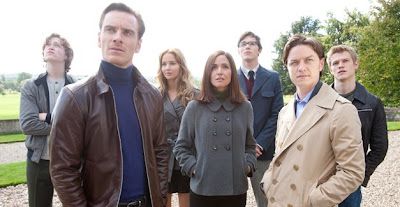 Ripped from the last X-Men movie, it's a replay of the 1944 Poland concentration camp where the young Erik Lehnsherr demonstrates a unique ability by bending an iron fence. What we didn't see then is that it brings him to the attention of a Nazi scientist in the camp, who viscously attempts to bring out Erik's power which only demonstrates itself when he is angry. Meanwhile a young Charles Xavier finds a young girl in his kitchen stealing food. He surprises her by reading her mind, and she shape shifts to her normal blue scaled self. Raven and Charles agree to be the best of friends.

Later in 1962 a grown up Erik is searching for the scientist who is now going by the name of Sebastian Shaw (Kevin Bacon who is a delight as a badguy), the leader of the Hellfire Club, a secret society bent on taking over the world. Shaw as it turns out is also a mutant who can absorb kinetic energy and turn it back against someone. He has surrounded himself with mutants Emma Frost (January Jones) a telepath who can change her body into diamond form, Azazel (Jason Flemyng) a demon who can transport, and Riptide who can create whirlwinds with his hands. CIA agent Dr. Moira MacTaggert (Rose Byrne) realizes that an expert on mutants will be needed. She seeks out Charles Xavier (James McAvoy) who is celebrating his promotion to professor. Raven (Jennifer Lawrence) is a bit miffed at Charles' attraction to Moira. The government officials are initially skeptical of the existence of mutants until Charles and Raven prove their point. They are assigned to a CIA Man in Black (Oliver Platt) head of Division X. There they meet Dr. Henry “Hank” McCoy (Nicholas Hoult) who is ashamed of his mutant self and is seeking a cure. He also creates Cerebro the machine that enhances Charles' telepathic powers so they can recruit others in their mission to stop Sebastian Shaw. They bring in Angel Salvadore (Zoe Kravitz) a stripper with firefly wings, Sean Cassidy (Caleb Landry Jones) who they call Banshee for his hypersonic screaming and flight, Darwin (Edi Gathegi) who has the power of reactive evolution and Alex Summers (Lucas Till) who they call Havok for his ability to discharge blasts of energy. They work with Charles and Raven who is now calling herself Mystique to handle their special powers. Sebastian finds out about the mutant training and decides to recruit them for his Hellfire club. When the mutants team up to fight Sebastian, they discover Erik who to this point had thought himself alone with his powers. He joins up with Charles and a great friendship is born.

The fifth installment of Marvel Comics X-Men series is directed by Matthew Vaughn director of Kick-Ass. Former X-Men director Bryan Singer wrote the story with the screenplay by Ashley Miller, Zack Stentz, Jane Goldman and Matthew Vaughn. A vast improvement over X-Men Last Stand, the origins story is more about the characters and less FX driven. There are some nods to later movies and characters...look for a amusing cameo with Hugh Jackman. You will to suspend belief that handsome Fassbender will turn into Ian McKellen, and McAvoy will lose his hair. For those not familiar with the comic series, it informs the viewers of why the characters are at such cross hairs later on. As for the rest of the story the main plot shows Shaw and the Hellfire Club are responsible for the Cuban missile crisis. Star Trek rebooted the franchise by casting new actors in familiar roles and it worked. While this is not as strong or exciting redo as Star Trek this version of X-Men works as well as an enjoyable summer blockbuster. Definitely worth the popcorn.
(Review by reesa)

Posted by Dallas Movie Screenings at 1:07 AM