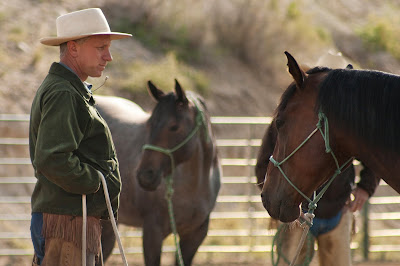 The documentary of Buck Brannaman has the tagline “There's no wisdom worth having that isn't hard won” which aptly describes the story of the unique and legendary horse trainer. Buck's story inspired first time documentary filmmaker Cindy Meehl to travel from North Carolina, Washington, Wyoming, California, Montana and Texas filming the man who was the consultant on Redford's The Horse Whisperer.

When Meehl started the project she thought it would be a film about training horses, but quickly realized it was really about horses training people. Buck's method is to teach the horses that they don't have defend themselves from humans. The cruel system of inflicting pain to train an animal is being replaced by Buck's calm and humane lessons. Riding a horse should be an extension of yourself, and the horse must have complete trust. Watching Buck train a horse is close to miraculousness. In the four day seminars that he holds at ranches across the country Buck teaches humans how to interact with their horses. While the horses learn to trust their riders, the riders in turn learn sometimes hard truths about themselves. Bucks way of training is influenced by the childhood abuse he endured by his father after his mother passed away. He and his brother toured the country as fancy ropers who were taught by their exacting father. Their horrific upbringing was discovered by their school coach who informed the local sheriff. The boys were removed and taken in by a couple who raised 25 foster children. To this day his foster mother remains close and influential to Buck. Channeling the hard lessons learned from his father, Buck reasoned that to “break” a horse required patience and understanding rather than brute force. Demonstrations show his skills in getting a horse to follow commands easily and teaching the owner to learn from what the horse is telling them. One rider who trains show horses admitted that what she thought was the correct way of doing things was wrong and painful for the animal. Buck says “Your horse is a mirror to your soul, and sometimes you may not like what you see. Sometimes, you will.”

Buck was the role model for Nicholas Evans book and was hired as an consultant for Robert Redfords' The Horse Whisperer. Redford at first was dubious when the cowboy dressed Buck first came to his office in Hollywood but shortly after he with struck by Bucks straight forward realness that rings true.
Buck is a loving husband and devoted father to his daughter Reata who travels with him at times and competes with him at roping events. When his daughter is not with him, he travels with just his horse Rebel. Sometimes visited by his wife. The sponsoring ranches welcome him with open arms. He's trained at least 10,000 colts from Olympic riders to just beginners treating everyone the same. In a world dominated by comic book hero's this is one hero that's real and home grown.
(Review by reesa)