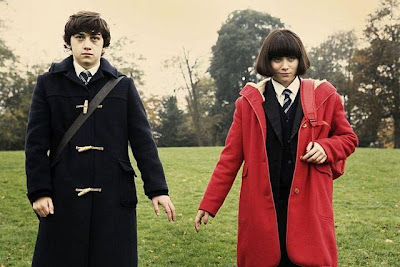 Oliver Tate is a 15 year old Welsh student who in the midst of self discovery as he imagines himself the hero of his own new wave film. Laying on his bedroom floor in his overcoat that he never seems to take off, he wonders how people would react to his death – the whole country would mourn – and then his glorious resurrection. First he has a couple things he would like to accomplish by his next birthday, to lose his virginity and to rekindle his parents relationship which is being threatened by the return of his mom's old boyfriend who has moved in next door.

Taken from the novel by Joe Dunthorne, director/writer Richard Ayoade indie feature debuts is quirky with shades of Wes Anderson. Filmed in a washed out pallet, Swansea seems constantly cold, wet and and perpetually overcast. Oliver (Craig Roberts) has set his romantic sights on Jordanna (Yasmin Paige) who has a reputation for having kissed most of her male classmates. To get her attention he plays a mean prank the class chubby girl even though deep inside it's not something he would have done. At first Jordanna uses Oliver's attentions to make her ex-boyfriend jealous. She has Oliver take pictures of them together and pretend kissing, then leaving fake diary messages around the school to prove that he's not gay. After Oliver gets beat up, Jordanna really kisses him, he gives her a recycled bracelet and they are now considered going steady. Next step is fulfilling the need to have sex.

Meanwhile his parents Sally Hawkins and Noah Taylor are monosyllabic and polite to each other and to Oliver. He can tell when his parents have had relations by the position of the light dimmer in their room. It's been several months since it's changed. His father used to be a marine biologist with a TV show now he sits at home in his bathrobe. His dad tries to feel supportive of Oliver having a girlfriend by offering a playlist including a seletion of songs for when they breakup. His mom is just glad that he's not gay after all. His mother's old boyfriend is now a new age guru who shills his books and videos in a ad covered van. Oliver later finds that his mom maybe cheating with the slick cheesy Graham (Paddy Considine). And it's up to him to stop it.

Broken into chapters that include a prologue and an epilogue, Submarine is a fresh, charming, and off the wall indie that may not translate well for mainstream American audiences. Sally Hawkins and Noah Taylor are great as the emotionally repressed parents. Their idea of parenting is to have serious talks with their son which just creeps him out instead. Craig Roberts embodies Oliver's awkward nebbishness wrapped in the ever present toggled overcoat. The voice overs and courting scenes with Jordanna may be over long and worn out, but the humor will keep you paying attention from beginning to end.
(Review by reesa)

Posted by Dallas Movie Screenings at 12:56 AM