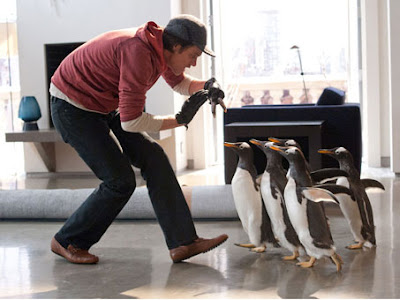 Florence and Richard Atwater's first published the children's book in 1938 about a poor house painter who comes in possession of a penguin that has 10 baby penguins. Director Mark Waters film version with a story by Sean Anders, John Morris, and Jared Stern has 6 birds living in a fancy high rise apartment with a driven businessman.

Mr. Tom Popper (Jim Carrey) works for Franklin, Reeder and Yates who buys buildings around Manhattan that are torn down for more high rises. His slick delivery and confidence is very profitable for his company that he believes he should be made a partner. But before he can do that, they want him to buy the land mark Tavern on the Green from the owner Mrs. Van Gundy (Angela Landsbury) who is really not interested.

Popper's father was an adventurer and pretty much an absentee father. He nicknamed his son Tippytoe on their CB radio, the only way that he was able to talk to him while away. Thirty years later when his dad passes away somewhere in Antarctica he bequeaths everything to the National Geographic society. To his son, he has a special gift that arrives in a crate at Popper's fancy penthouse. It's a refrigerated box with a frozen penguin inside. Once removed the penguin thaws and although Popper is amused he's late for work. He puts the bird in a bathtub full of ice. Not too long later he gets 5 more boxes for a ½ dozen birds. He tries to hide them because his building doesn't allow pets, He calls various agencies around town, but they pass it off to other places. Popper is in a quandary until his kids who live with their mom discover what he's hiding. Popper loves his kids, but being divorced makes it difficult to keep up with his teenage daughter and young son who don't see him often because of his work. His ex-wife Amanda (Carla Gugino) has started dating again is a bit amazed at Popper who has embraced the birds in his own way. He's even given them names: Captain, Bitey, Lovey, Nimrod, Loudy, and Stinky. Soon he's obsessed with keeping the birds happy, especially when they start laying eggs. He forgets that he's supposed to be negotiating the sale of the Tavern on the Green. Meanwhile the zoo keeper Nat (Clark Gregg) wants to take the penguins to trade to other zoo's.

Popper's Penguins is a fun and delightful family film. Carrey is not as annoying as he's been in past films with the excessive mugging and rubber limbs. Ophelia Lovibond's Pippi Popper's personal assistant is amusing in her P alliterations. Plus who doesn't love penguins? Popper learns to appreciate his father when he discovers that he had sent him a rare species of penguin that is affectionate and bonds quickly. At one point they even manage to follow Popper to the Guggenhein Museum. Popper becomes completely obsessed with the birds and the new found attention of his children by turning his apartment into a winter wonderland. Real Gentoo penguins were used, but obviously none were harmed in animating them to dance and react in unison. This is one matinée that parents won't mind taking their kids.
(Review by reesa)